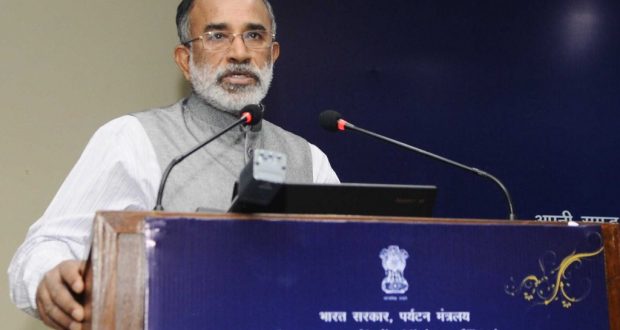 in National April 24, 2018 Comments Off on Letters of Intent awarded today by Tourism Minister to 9 agencies for 22 monuments under Adopt a Heritage project 1,012 Views

Newdelhi:24/4/18:The 3rd Award Ceremony of Adopt a Heritage Project was conducted by Ministry of Tourism in collaboration with Ministry of Culture and Archaeological Survey of India (ASI), State/UTs Governments in New Delhi today for awarding the Letters of Intent to the shortlisted agencies under Phase IV of the project. Awarding the Letters of Intent to 9 agencies for 22 monuments of Phase-IV, Union Minister for Tourism (IC) Sh. K. J. Alphons asked the stakeholders to ‘protect, preserve and market’ the heritage of India. The Minister also emphasised on creation of awareness amongst the corporates and citizens to adopt heritage sites under the project for creation, operation and maintenance of basic and advanced amenities at tourist destinations. The event had a discussion session with the stakeholders in which the concerns and suggestions were made to the Minister and Ministry officials.

The scheme “Adopt a Heritage: Apni Dharohar, Apni Pehchaan” was originally launched on 27thSeptember 2017 to preserve the rich cultural and natural heritage and to promote tourism across the length and breadth of our country. The Project began with selected ASI ticketed monuments and the scope has now been expanded to include other natural and cultural sites across the country. It was strongly emphasised that tourist experience is the prime parameter to evaluate our performance in the sector. 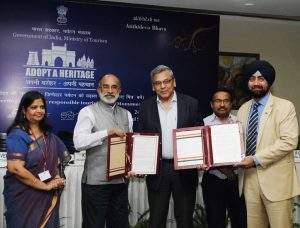 As on date, the project has received very encouraging response with over 195 registrations as per the project website. Various agencies that have come forward for adoption include not only public and private industry, but also schools and individuals. So far, 31 prospective monument mitras have been shortlisted by the Oversight & Vision committee for developing tourist friendly amenities at 95 monuments, heritage and other tourist sites including major heritage sites like Red Fort, Qutub Minar, Hampi, Sun Temple, Ajanta Caves, Char Minar, Kaziranga National Park. Earlier, two MoU’s were been signed between Ministry of Tourism, Govt. of Jammu & Kashmir, Govt. of Uttarakhand and Adventure Tour Operators Association of India(ATOAI) for Mt. Stok Kangri, Ladakh, Jammu & Kashmir and for Gangotri Temple Area & Trail to Gaumukh in Uttarakhand. Further, two MoUs were also signed for Red Fort, Delhi and Gandikota fort, Andhra Pradesh between Ministry of Tourism, Ministry of Culture, Archaeological Survey of India and Dalmia Bharat Limited.