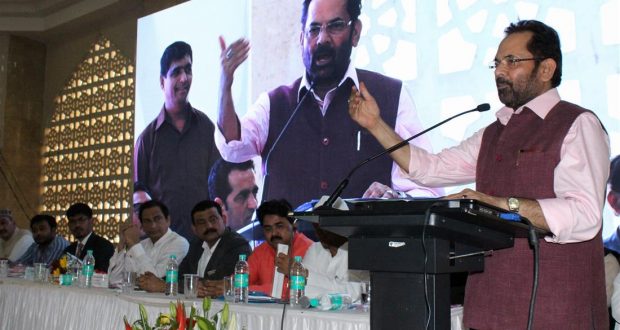 India’s Haj quota increased; record number of pilgrims this year even without subsidy

in National April 22, 2018 Comments Off on India’s Haj quota increased; record number of pilgrims this year even without subsidy 682 Views

Newdelhi:22/4/18:Union Minister for Minority Affairs Shri Mukhtar Abbas Naqvi said that for the first time after the Independence, a record number of Muslims from the country will go to Haj this year and that too without any subsidy. He was speaking today at a training camp organised for Haj “Khadim-Ul-Hujjaj” at Haj House, in Mumbai.

Shri  Naqvi said that the Government led by Prime Minister Shri Narendra Modi has succeeded in getting India’s Haj quota increased for the consecutive second year and for the first time after the Independence, record 1,75,025 pilgrims from India will go to Haj 2018.

This year, a total of 1,28,002 pilgrims will go through Haj Committee of India which include about 47 per cent females. 47,023 Haj pilgrims will go through Private Tour Operators.  Besides, for the first time Muslim women from India will also go to Haj without “Mehram” (male companion). A total of 1308 women have applied to go for Haj without “Mehram” and all of these women have been exempted from lottery system and allowed to proceed to Haj.

The Centre’s Modi Government’s commitment to transparency and strict directives given to the airlines to check unreasonable increase in fares has ensured that Haj 2018 air fares have been come down significantly this year.

Shri Naqvi said in the training camp that making the Haj process completely online/ digital has helped to make the entire Haj process transparent and pro-pilgrims.

Minister said that Saudi Arabia has given green signal for India’s decision to reviving the option of sending Haj pilgrims through sea route also and officials from both the countries are in discussion on all the necessary formalities and technicalities so that Haj pilgrimage through sea route can be started in the coming years.

He also said that for the first time, choice of embarkation points has been given to Haj pilgrims which has received overwhelming response.

In this training camp, 623 “Khadim-ul-Hujjaj” from all the states participated. Officials from Haj Committee of India, Bruhan Mumbai Mahanagar Palika, Disaster Management agencies and doctors informed them in detail, all the process related to Haj including accommodation, transport, health and safety of Haj pilgrims at Makkah-Madina. For the first time, Female Haj Assistants will be deployed to monitor various facilities for women Haj pilgrims.