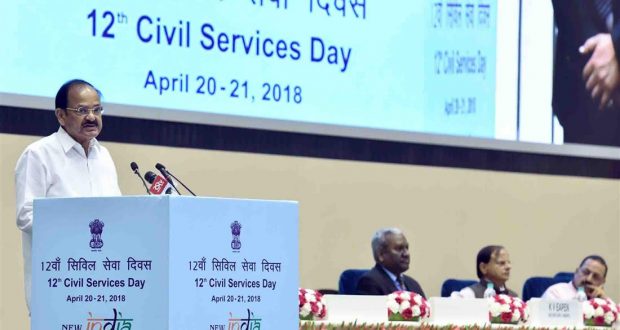 Newdelhi:20/4/18:The Vice President of India, Shri M. Venkaiah Naidu has said that translating “legislative intent” into “programmatic content” and demonstrating to the common citizens what “Surajya” actually looks like in day to day administration, the civil services have an enormous opportunity today. He was delivering the inaugural address at the 2-day event of the 12th Civil Services Day, here today. The Vice President said that a clean, competent, people-friendly, proactive administrative leadership is the need of the hour. He further said that ‘Swarajya’ has to be meaningful for each Indian and, for this ‘Surajya’ is inevitable. There is a need for honest introspection into the effectiveness and efficiency of our administrative structures and processes, he added. He said that the focus has shifted to “implementation” and “innovation” and it is becoming increasingly clear that “business as usual” approach will not do. We must collectively transform India into a nation that we can all be proud of, he added.

The Vice President called on officers of Civil Services to reorient their approach to look upon themselves as catalysts of change, as facilitators of change, as inspirational leaders for an aspirational India. He further said that it is the collective responsibility of the executive, the legislature, the judiciary and the media to identify, combat and root out evils including casteism, communalism, corruption, inequality, discrimination and violence. We need to be sensitive to these unpleasant realities and try to alter them by being unbiased and evenhanded, he added.

Addressing the session, the Union Minister of State (Independent Charge) for Development of North Eastern Region (DoNER), MoS PMO, Personnel, Public Grievances, Pensions, Atomic Energy and Space Dr Jitendra Singh said that the main objective of the Civil Services Day is to acknowledge and recognise the good work done by the civil servants. He added that this is a platform for civil servants to share their best experiences and reorient themselves to the emerging requirements of the New India. He added that during the last four years, the entire format of the Civil Services Day has changed and now the work done for implementation of priority programmes is rewarded under PM awards. This year four priority programmes have been chosen, he added. He said that 643 districts have participated for PM awards this year. He appreciated that 103 districts out of 115 aspirational districts have participated for these awards and 75 aspirational districts have participated under Innovation category.On the occasion, the Vice President released a book titled “Emulating Excellence -Takeaways for Replication, Prime Minister’s Awards – Priority Programmes 2017 & 2018 contains 9 chapters on best practices for priority programmes in which PM Awards were given on CSD, 2017 and are being given on CSD, 2018.Earlier, the Vice President inaugurated an exhibition put up by DARPG on identified Priority Programmes and Innovations. Success stories of identified priority programmes i.e. Pradhan Mantri Fasal Bima Yojana, Promoting Digital Payments, Pradhan Mantri Awas Yojana– Urban & Rural, and Deen Dayal Upadhyaya Grameen Kaushalya Yojana are displayed and shortlisted Innovation by Aspirational districts and Central and State organisations are also showcased. Creative works of Civil Servants including books, music, paintings etc. are showcased in the Exhibition.

A film on Journey to PM-Awards was also screened during the function. In this film complete selection process of PM awards including changes made in the process during 2016, 2017 and 2018 have been showcased.

2018-04-20
Editor in chief
Previous: Congress-led seven opposition parties submitted an impeachment motion for the removal of Chief Justice
Next: Water storage level of 91 major reservoirs of the country goes down by one percent