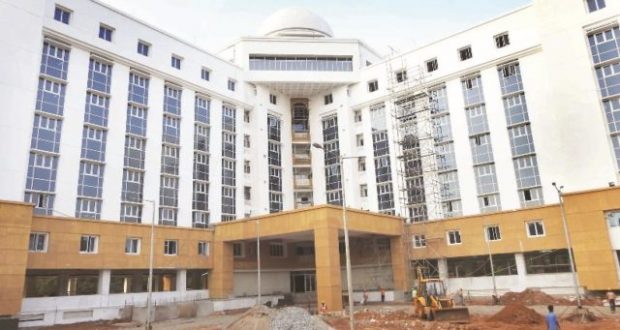 in State News April 20, 2018 Comments Off on New ‘Nataala’ building incurred of Rs 124 crore in an area of three acre going to inaugurated very soon 967 Views

Bhubaneswar:20/4/18 The new ‘Nataala’ building housing most of the offices of head of departments is likely to be inaugurated here very soon.

The construction work of the building that was expected to be finished in April this year may take another two months for completion and it is likely to be inaugurated either end of June or first week in July this year, said a source in Public Works department.

Meanwhile, around 15 departments have appealed to the General Administration (GA) department to shift their offices to the new building.

However, a meeting chaired by Chief Secretary Aditya Prasad Padhi has decided not to relocate the offices operational in the existing ‘Nataala’ building. As per the decision, the departments in the State Secretariat that could not be functional properly due to lack of infrastructure will be shifted to the new building.

Notably, ‘Nataala’ or nine-storey building located just behind Odisha Legislative Assembly and State Secretariat houses most of the offices of the Heads of Departments.

According to reports, the government had planned to construct another ‘Nataala’ building in 2014 in view of the shortage of space for operation of most of departments on the premises of State Secretariat.

Following tender dispute, the L&T was given the tender for construction of new building at investment of Rs 124 crore in an area of three acre in 2016 in front of Nirman Soudh. Although, the new building was schedule to be completed in April this year, the construction work is still in progress.