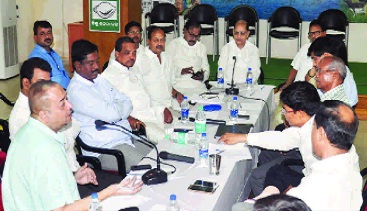 in State News April 16, 2018 Comments Off on BJD is all set for another bout of agitation on the Mahanadi issue 885 Views

Bhubaneswar:16/4/18; The BJD is all set for another bout of agitation on the Mahanadi issue. The party will hold a meeting on April 22 where MLAs, MPs, ZP and Block chiefs, Municipality and NAC chairmen, BJD district, block, Nagar level presidents from 15 districts on the bank of the river Mahanadi, besides representatives from various wings of the party and organizations would join.

Chief Minister Naveen Patnaik and party supremo Naveen Patnaik would remain present and discuss with the representatives from the 15 riverside districts.

At a meeting here on Sunday, the BJD leaders discussed various issues concerning the gradual drying up of the Mahanadi, the delay in framing the ToR for the tribunal by the Centre to help the BJP State Government in Chhatisgarh ahead of the local election in the State and the construction of barrages on the river upstream and also on the upstream of the IB river.

The leaders said as the Chhatisgarh has closed all the gates in the Kalama barrage, the water flows to the Mahanadi river downstream have dipped considerably. They said due to the drying up of the river, many people whose life and livelihood were hit have started deserting their villages on the bank of the river.