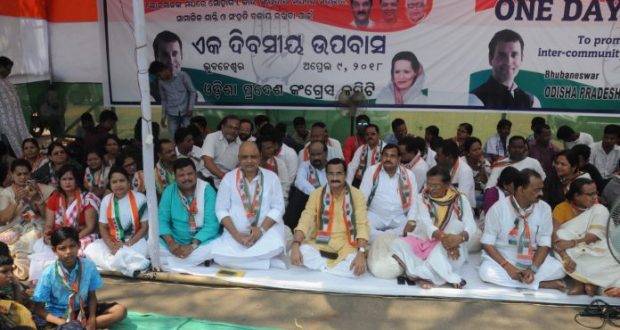 Bhubaneswar:9/4/18; Members of Odisha Pradesh Congress Committee (OPCC) observed a one-day fast at Congress Bhawan here on Monday as a part of the nationwide hunger strike called by the party.

“The day-long fast aims to promote inter-caste harmony and peace across the country. The people should shun violence and promote communal harmony. They should also be aware about the Centre’s failure on Dalit issues, dilution of SC/ST (Prevention of Atrocities) Act and farm distress”, said Congress leader and former Chief Minister Hemananda Biswal.

Hunger strikes are being held at all the 33 organisational districts of the Congress party across the state.

In reply to a media query about the mass exodus from Congress party, OPCC president Prasad Harichandan said, “Those who have joined other parties have taken such decisions for their personal gains, and people of Odisha have started recognizing their motives. The OPCC will definitely give a befitting reply to those leaders during the upcoming elections.”

2018-04-09
Editor in chief
Previous: Hundreds of students of different colleges joined the agitating teachers on Monday
Next: Hundreds of BJP and Congress activists from Kendrapara has joined the Biju Janata Dal