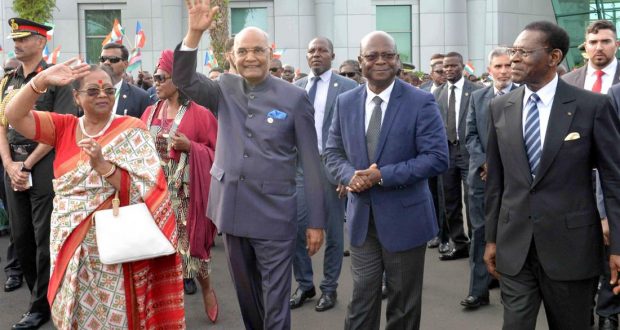 The President formally commenced his engagements today (April 8, 2018) when he met his counterpart, President Obiang, at the Presidential Palace in Malabo. President Kovind was conferred with the Condecoracion, the highest honour accorded to a non-citizen by the government of Equatorial Guinea, and previously given to select Heads of State from friendly countries.

Subsequently, the President led delegation-level talks between the two sides. Speaking on the occasion, the President said that the two countries have enjoyed warm and cordial relations. India attaches the highest importance to its relationship with Equatorial Guinea. It is in that spirit that the government of India has decided to open an embassy in Equatorial Guinea. This will give a major boost to our relations.

The President said that the economies of our two countries are complementary. Equatorial Guinea is endowed with hydrocarbons and mineral resources, and India with human and financial capital and low-cost technical expertise. The full potential of our bilateral engagement is far from realised. India looks forward to partnering with Equatorial Guinea in facilitating government-to-government development cooperation as well as business-to-business contacts.

The President said that during the India-Africa Forum Summit of 2015, India had announced concessional lines of credit of US$ 10 billion over five years for African countries. He urged the government of Equatorial Guinea to avail of this facility. He said that India would be happy to assist in developing project proposals in various sectors of Equatorial Guinea’s economy.

Later in the day, the President will address members of the Parliament of Equatorial Guinea. This evening he will also meet and address the Indian community in Malabo.

2018-04-08
Editor in chief
Previous: The mantra of 3R – Reduce, Reuse and Recycle – Is at the heart of any vision towards the sustainable development of mankind
Next: We must encourage women to participate in designing and implementing their vision for the country: Vice President