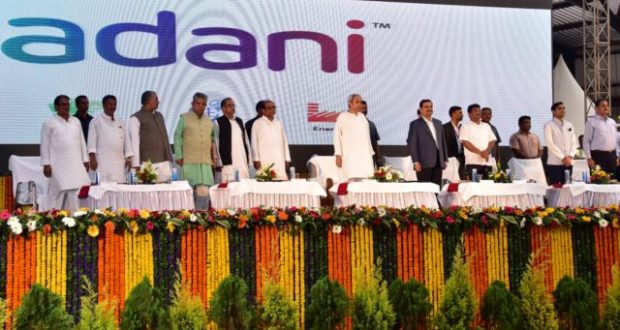 Dhamra Port of Odisha is a model of modern maritime trade :Naveen Patnaik

in District Diary April 7, 2018 Comments Off on Dhamra Port of Odisha is a model of modern maritime trade :Naveen Patnaik 785 Views

Bhadrak:7/4/18; Chief Minister Naveen Patnaik today said the Dhamra Port of Odisha is a model of modern maritime trade and a successful example of the PPP (Public Private Partnership) model.

“The industrial park being set up by Adani will unleash large scale industrialization in the area and create employment opportunities,” Naveen said while inaugurating the Phase II expansion of the Port by the Adani Ports and Special Economic Zone Ltd, (APSEZ), India’s largest port developer and part of the Adani Group.

Addressing the gathering, Gautam Adani, Chairman of Adani Group said, “This is a very proud moment for all of us in Odisha as well as the entire country. The Phase II expansion of Dhamra Port will not only make Dhamra India’s largest port but will also serve as India’s major gateway for trade with South East Asian Nations. We would like to sincerely thank all the government officials for their support in completing this expansion which will enhance growth, trade and industry for Odisha and India”.

Speaking on the occasion, Karan Adani, CEO, APSEZ said, “We are delighted by the speed of execution of our teams that completed this expansion of the Phase II of Dhamra Port way before schedule. This expansion will help us achieve our vision 2020 of 200 MMT, well ahead of time and we now aim to touch 500 MMT by the year 2025. We acknowledge the support of the Odisha government which enabled us to achieve this feat which renews our conviction and commitment to make Adani Dhamra Port an island of excellence, not only for Odisha but also for India.”

The phase II expansion of Dhamra Port will increase the Cargo handling capacity of the port to over 100 million tonne per annum, up from 25 mtpa currently handled. The company deployed more than 3000 manpower with around 88% locals employed for the phase II expansion.

2018-04-07
Editor in chief
Previous: Veteran Ollywood star Bijay Mohanty would be New chairman of Odisha Film Development Corrportion
Next: Police Uncle’ an initiative to drive away police fear among children