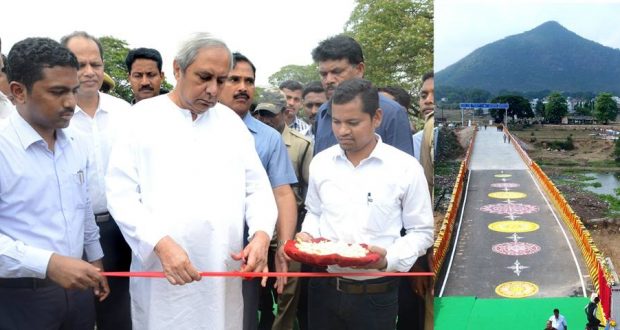 With its inauguration, the bridge built with Rs 7.35 crore has opened up road connectivity between Odisha and Andhra Pradesh.

During his one-day visit, the Chief Minister inaugurated and laid foundation for as many as 132 projects worth Rs 68,93,16,132 for different blocks in Gajapati district at the Gajapati Stadium here. 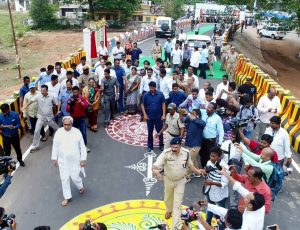 Thereafter, he launched and laid foundation stones for projects prominent of which are a 100-tonne cold storage at Ramgiri, Adarsha Vidyalaya building at Gumma Krushnachandrapur, Information and Aid centre for farmers at Gumma, a 100-bed girls’ hostel at Aliganda, Government quarters at Rayagada, ANM centre at R Udaygair, Bharat Nirman Rajiv Seva Kendra at Kashinaga, turmeric processing unit at Ramgiri, 100-bed trial boys’ hostel at Seranga, a water supply project at Abarasi-Dambadhia and a 200-bed tribal hostel at Chandipur.

Earlier, many tribals in traditional attire performed a folk dances to welcome the Chief Minister to the district.

2018-04-05
Editor in chief
Previous: Akshay Parija Productions announced an ambitious plan of making 12 Odia movies in next 2 years
Next: Veteran Odia film actor Debu Bose has been put on ventilator