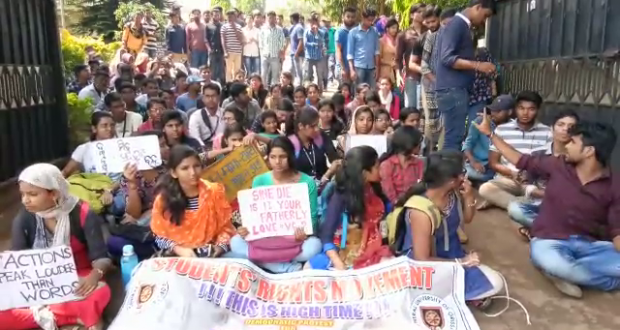 in District Diary April 5, 2018 Comments Off on Central University of Odisha students intensified their agitation over fulfillment of a 60-point charter of Demands 816 Views

Koraput:5/4/18: Tension ran high at the Central University of Odisha (CUO) in Koraput today after students intensified their agitation over fulfillment of a 60-point charter of demands which includes removal of the Vice-Chancellor.

The situation turned ugly when a group of agitating students stormed into the chamber of the Vice-Chancellor Sachidanada Mohanty seeking his dismissal. While a group of students staged agitation at the varsity’s main administrative office at Sunabeda, another group staged demonstration at the old campus of the university at Landiguda. Meanwhile, police personnel have been deployed outside the university to avoid any untoward incident.

“We have been sitting on dharna for the last three days. But neither the VC nor any other official of the university has come to us for a discussion. Meanwhile, around 25 students have fallen sick due to the strike and some of them have also been admitted to hospital,” said an agitating student. Meanwhile, the varsity Vice-Chancellor has said that only a relatively smaller section of students have hijacked the movement and are not letting the varsity function smoothly.

“We should not do anything that will be objectionable and unacceptable according to law and order. I believe in reformation not in punishment. I have never termed any students criminal rather I have just stated that it is criminal mindedness to resort to this extent. We have tried to meet most of the demands of the agitating students that is within our capability,” Vice-Chancellor Sachidanada Mohanty said.

2018-04-05
Editor in chief
Previous: Ratna Bhandar of Shree Jagannath Temple in Puri is in need of Repair,
Next: Akshay Parija Productions announced an ambitious plan of making 12 Odia movies in next 2 years