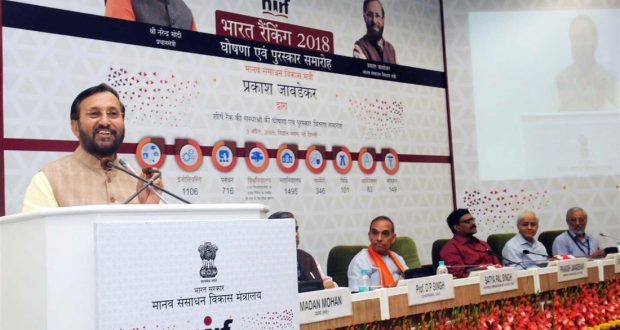 in National April 3, 2018 Comments Off on National Institutional Ranking Framework:Four educational institutions from Odisha found a place in Top 100 635 Views

Among all the universities, SOA was placed at 24 while KIIT and OUAT were ranked 42 and 91 respectively.

Among the management institutes, KIIT was ranked 30 and XIMB was placed at 36. Similarly, SOA University and KIMS were placed at 19 and 20 respectively among the medical colleges. NIT, Rourkela and IIT, Bhubaneswar found place in Top 20 engineering colleges in the Country.

The Indian Institute of Science (IISc), Bangalore has been adjudged the Best University in India while Delhi’s Miranda House was awarded as the Best College.

According to the ranking by the NIRF, Jawaharlal Nehru University (JNU) and Banaras Hindu University (BHU) were ranked second and third respectively.

All India Institute of Medical Science (AIIMS) Delhi was ranked number one institute under medical college category while NLSIU-Bengaluru was awarded as the best law school in the country.

This year medical and dental colleges were ranked for the first time by the National Institutional Ranking Framework (NIRF). Apart from the medical, NIRF also added Architecture and Law this yea