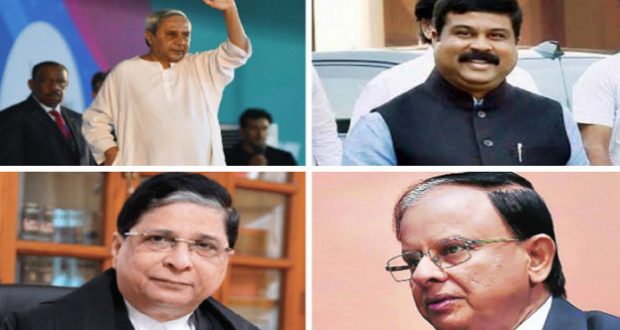 Bhubaneswar:30/3/18; Bringing laurels for the state, four Odias have been named by the Indian Express in its list of ‘100 Most powerful Indians’. In the list Chief Justice of India (CJI) Dipak Misra has been placed at 3rd rank following Prime Minister Narendra Modi and BJP chief Amit Shah.

Odisha’s two political stalwarts Chief Minister Naveen Patnaik and Union Petroleum Minister Dharmendra Pradhan have been placed at 30th and 32nd place respectively. Besides, one other influential person from the state was also included in the list.

He is Additional Principal Secretary to the Prime Minister PK Mishra who has been placed at 44th position.

“Naveen Patnaik is still the tallest leader in the state with the image of someone who has zero tolerance for corruption. His BJD won a huge mandate in the Bijepur bypoll in February, which many held as a litmus test for the party”, stated the Indian Express.

The vernacular daily termed Dharmedra Pradhan as “Pradhan is the BJP’s most wellknown face in Odisha, where the party hopes to challenge Naveen Patnaik’s 17-year-rule”.

2018-03-30
Editor in chief
Previous: Thunderstorm and lightning warning in 15 districts of Odisha
Next: JSPL Foundation extended support to 139 artist families during its second edition of Social Security Support Scheme