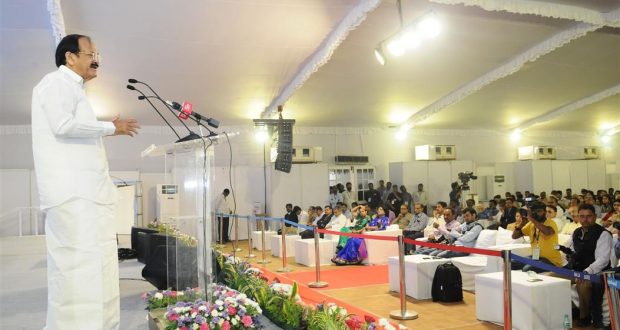 Hyderabad:30/3/18;The Vice President of India, Shri M Venkaiah Naidu has said that empowering women will enable them lead a life of dignity, respect and make informed decisions. He was addressing the gathering at the Silver Jubilee Celebrations of Mahila Dakshata Samiti, in Hyderabad on March 30, 2018. The Governor of Goa, Smt. Mridula Sinha, the Deputy Chief Minister of Telangana, Shri Mohammad Mahmood Ali and other dignitaries were present on the occasion.

The Vice President said that there is enough evidence to show that women during the early Vedic period were seen as equal to men in all walks of life. He further said that our cultural moorings have gender equality as a core principle. We are proud inheritors of a culture and a world view in which women were not only treated equally but were revered, he added.

The Vice President said that India’s long, rich history is dotted with numerous achievements of extraordinary women. Quoting examples of great women like Prabhavati, the daughter of Chandra Gupta II, Razia Sultana, the only woman monarch to rule Delhi; Durgavati the Gond queen and Rajmata Jijabai, famous poetesses like Molla who wrote Ramayana in Telugu; Akka Mahadevi, Andal and Avvaiyar and others, he said that India has a long lineage of highly accomplished women.

The Vice President said that despite our rich heritage, there has been unfortunately a parallel trend of gender discrimination. This has resulted in low literacy, low education and consequently, low representation in the workforce and politics, he added.

The Vice President said that unequal access to education, gainful employment and growth opportunities are widening the gender gap and atrocities on women and domestic abuse are unfortunately tarnishing our image as a nation.