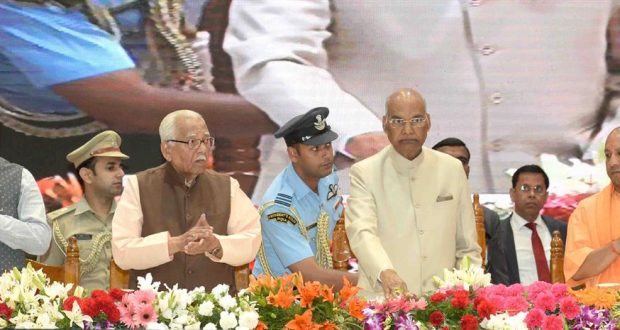 President of India in Varanasi; inaugurates Construction of NHAI Projects

in National March 26, 2018 Comments Off on President of India in Varanasi; inaugurates Construction of NHAI Projects 668 Views

Varanasi (UP)26/3/18;The President of India, Shri Ram Nath Kovind graced various functions of the Government of Uttar Pradesh and the National Highways Authority of India in Varanasi today (March 26, 2018). These included laying of the foundation stone for five projects of NHAI, and distribution of appointment letters to candidates selected at a job fair organised by the Vyavasaik Shiksha Evam Kaushal Vikas Vibhag of the Government of Uttar Pradesh.

Speaking on the occasion, the President said that since ancient times, Varanasi has linked northern India with eastern India through waterways on the Ganga as well as by road. The Ganga has contributed to the culture and civilisation of city, and the region, and also to trade and development. Today, the effort is to renew this spirit. Varanasi, through the National Waterways-1, the Eastern Freight Corridor and various highway projects, is re-emphasising its location as the gateway for the northern states to eastern India. The Government is focusing on infrastructure and connectivity to make Varanasi an economic hub.

The President said Varanasi offers enormous opportunities in tourism, which can lead to large-scale employment generation. Varanasi’s handicrafts are well-regarded and world famous. The President said he was happy to note that several schemes have been undertaken to provide modern facilities to craftspersons and connect their traditional skills to modern technology as well as new markets. He was confident that the Deendayal Upadhyay Hastkala Sankul, where the function was being hosted, would help artisans in the Varanasi region enhance incomes and create jobs.

The President said he was certain that with its legacy and heritage — and the knowledge, wisdom and talent of its people — Varanasi would continue to be a leading city in the 21st century. He was glad to learn of the initiatives of the Union and state Governments in this regard.

Later in the day, the President received the first copy of the Sanskrit translation of the book ‘Charaiveti! Charaiveti!!’, written by Shri Ram Naik, Governor of Uttar Pradesh.

Speaking on the occasion, the President said that Shri Ram Naik has left a distinct impression on public life through five decades of dedication and selfless service. In this book, he has shared his experiences, and has spelt out his philosophy — to work relentlessly, without being affected by setbacks and successes.

2018-03-26
Editor in chief
Previous: Great Orissa Famine of 1866 has come under limelight with the inauguration of an exhibition of photographs
Next: Joint Group Most Important Dialogue Mechanism between India and China – Suresh Prabhu