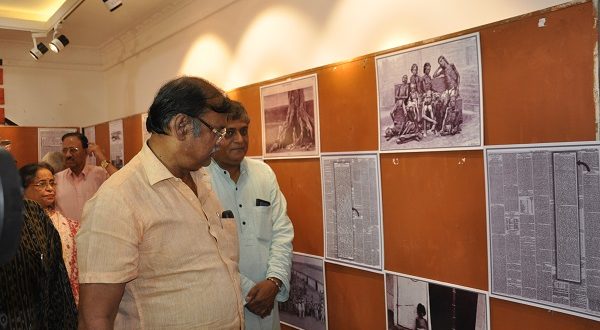 in Smartcity Bhubaneswar March 26, 2018 Comments Off on Great Orissa Famine of 1866 has come under limelight with the inauguration of an exhibition of photographs 628 Views

Bhubaneswar:26/3/18; The cataclysmic effect of Great Orissa Famine of 1866 has come under limelight with the inauguration of an exhibition of photographs, sketches and newspaper reports on the biggest catastrophe that the state had encountered.

The exhibition organised by The Indian National Trust for Art and Cultural Heritage (INTACH) and Odisha State Archives was inaugurated by Ashok Panda, Minister for Culture at the hall of the State Archives today.
It was flashback to turbulent times and untold suffering of people dying in thousands due to hunger.

On display are newspaper reports published in the overseas press of the 1866-68 periods along with sketches, cartoons, drawings and photographs. These shed new light of the conditions and the suffering of the people.
Speaking on the occasion, Panda said that the Na’Anka Durbhikshya was a dark forgotten chapter of Odisha’s history. Even though the events that happened have been pushed to one corner of history, it has been a part of Odia consciousness and subconscious ever since.

S.K.B.Narayan, Convener of INTACH said that even today, 150 years after the Great Famine, Odisha faces regular threats of calamities like droughts, floods and cyclones, and crop failures. He said that the exhibition would be taken to the other INTACH chapters of Bhadrak, Balasore & Baripada too.
Anil Dhir, who has curated the exhibition, said that a suitable memorial of the Great Famine should be set up in memory of the million and a half who had perished. He said that the Famine was not an accident of nature. It was not providence; rather it was a series of mistakes. For many decades after the great famine, it was simply a dark and even humiliating experience which the survivors, and the survivors of the survivors, had little wish to recall, the anguish of a past in which men and women barely survived.

2018-03-26
Editor in chief
Previous: Odisha Assembly was today adjourned twice following commotion by the Opposition Congress over delay in appointment of Lokayukta
Next: President of India in Varanasi; inaugurates Construction of NHAI Projects