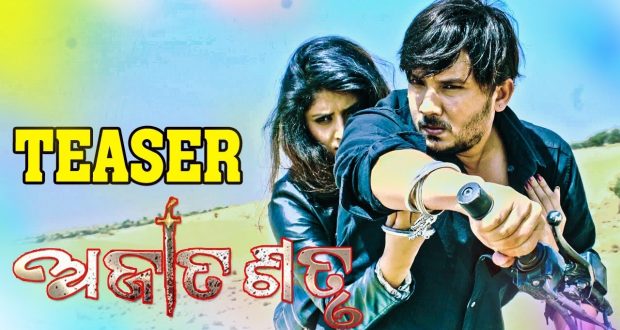 Odia movie Ajatshatru had hit the theater on 23rd. March,2018 across the state.

Raj Baliarsingh is a brilliant student and completed Graduation in Software Engineering and Automobile. Nikita was the classmate of Raj and they are very good friends. Raj has lots of love in his heart for Nikita, but after some days they face each other as criminal and police officer

.Here one interesting thing you find though we found many police officer in the movie we could not trace them in which police station they belong,What is their designation  even we could not find them in police uniform in any frame.Have you heard person imprisoned  in jail for drink during the motor cycle driving and he was shifted the court with arm guard and iron chain was being tighten in his feet,Yes he is Raj Balir Singh hero of the film.It is an advise to both actor and director at first they should read  Indian Penal code and aware about the Punishment.

Actually, this is the overall story of new upcoming Odia movie Ajatshatru, which is the special creation of Ray Media Communication. This is a totally a new concept for Odia Film industry and the story of this movie is written by the versatile personality Mr. Biswabhusan Mohapatra. Dialogue for the movie was written by Mr. Nirmal Nayak. Movie Ajatshatru is produced by producer Soham Singh.

The Rangila Toka fame heroine Debjani, who has already created a special place in Ollywood by her brilliant acting, is seen in the role of a Cop.

Mr. Soham Singh is the producer of the movie side by side he is also the main Hero of this cinema. Sadhwi Singh, a mumbai based actress is also playing a vital role in this movie. The other star cast’s are Monoj Mishra,Kali,Pravati Sahoo,Lala Biren Ray Comedy master Sail Mitra and others.

2018-03-24
Editor in chief
Previous: Odia film Ole Ole Dil Bole Music CD was released
Next: ‘Rukuna Rath’, the chariot of Lord Lingaraj in state capital had to be stopped for today