Top Headlines
Home » National » India’s vulnerability to drug trafficking due to its location in Golden Crescent and Golden Triangle:Rajnath Singh 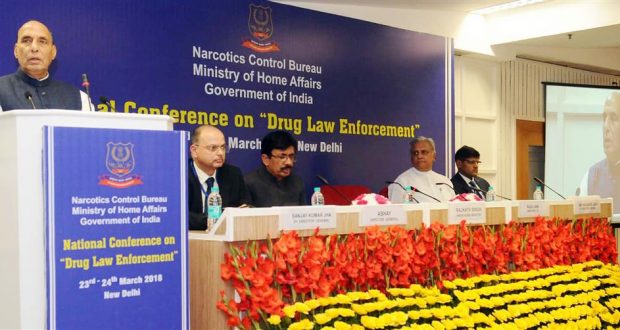 India’s vulnerability to drug trafficking due to its location in Golden Crescent and Golden Triangle:Rajnath Singh

in National March 24, 2018 Comments Off on India’s vulnerability to drug trafficking due to its location in Golden Crescent and Golden Triangle:Rajnath Singh 736 Views

Newdelhi:24/3/18The Union Home Minister Shri Rajnath Singh said that India is vulnerable to narcotic drug trafficking as it is located between two largest Opium producing regions of the world i.e. Golden Crescent in the west and Golden Triangle in the east. He was speaking at the Closing Ceremony of the two-day National Conference on Drug Law Enforcement organized by Narcotics Control Bureau (NCB), Ministry of Home Affairs here today.

Shri Rajnath Singh said that drug trafficking and abuse pose serious threat to our societies and is matter of serious concern for all of us. He said that drugs endanger peace, health and stability across regions and it places a heavy burden on public health systems. Hence all of us have to work towards prevention of narcotic drug abuse, Home Minister appealed. He emphasized both on supply reduction and demand reduction of drugs. He said, diversion of precursor chemicals and production and trafficking of New Psychoactive Substances poses another challenge. The Minister also highlighted that the illicit cultivation of Opium and Cannabis in some parts is a matter of concern and must be suppressed.