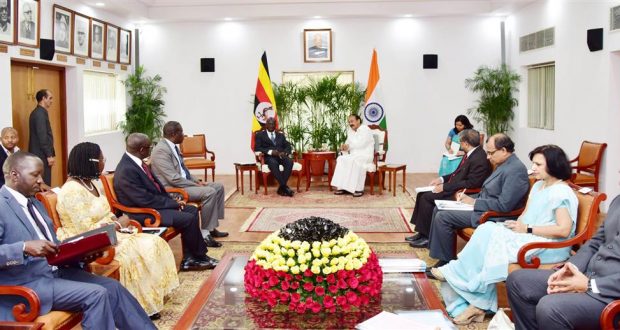 in National March 24, 2018 Comments Off on India stands committed to support African Countries in their development efforts: Vice President 910 Views

In a rare occurrence, the Vice President had one-to-one bilateral discussions with three African Vice Presidents and also called on the President of the Federal Republic of Germany, Dr. Frank-Walter Steinmeier later in the day.

While interacting with the Vice Presidents of Zimbabwe, Uganda and Malawi, the Vice President said that India will strive to deepen its levels of political, economic and technical engagement with African countries and is committed to assist them for economic growth and national development. He reminded that during the India-Africa Summit in 2015, the Indian Prime Minister has offered soft loans to African countries in the form of Lines of Credits, and these loans can be availed of in areas of infrastructure, power, roads, industrial parks, agriculture etc. Solar energy is one area where India is extending loans to several African countries and is ready to consider any request from them, he added.

The Vice President said that India’s relations in the field of defence and security have gained momentum and several countries have come forward to gain training and other defence related support. He further said that training and capacity building has been the focus of defence cooperation between these countries and Indian Military Training Teams have been actively engaged in the field of training.

The Vice President suggested that India’s expertise in agriculture can be fruitfully utilized to give a new innovative, dynamic impetus to agricultural development in many of the African countries.

While interacting with the President of the Federal Republic of Germany, Dr. Frank-Walter Steinmeier, the Vice President said that India and Germany share similar perceptions on most of the issues confronting the world. He hoped to deepen the cultural and economic ties between the two countries as well as work towards a more just, peaceful, inclusive and equitable world order free from terrorism. He decried the activities of one of India’s neighbour which is encouraging, abetting and aiding terror groups. Terror has no religion; he emphasized and suggested that the world community must be unanimous in curbing and rooting out terror in all forms.

2018-03-24
Editor in chief
Previous: India’s vulnerability to drug trafficking due to its location in Golden Crescent and Golden Triangle:Rajnath Singh
Next: Jyoti and Jhilik’s starrer ‘ Ole Ole Dil Bole’ going to be released across the state on 13th,April,2018.