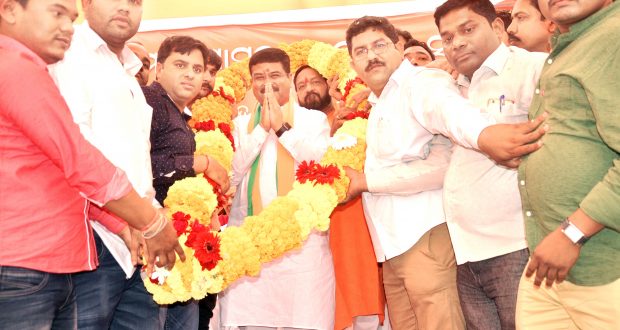 BJP is emerging as the main Opposition party in Odisha: Dharmendra Pradhan

in State News March 17, 2018 Comments Off on BJP is emerging as the main Opposition party in Odisha: Dharmendra Pradhan 697 Views

Bhubaneswar:17/3/18: Chief Minister Naveen Patnaik has made an undeclared alliance with the Congress and this has been proved from the BJD’s winning Bijepur by-poll recently; and the BJP is emerging as the State’s main Opposition party, said senior BJP leader and Union Minister Dharmendra Pradhan here yesterday.

The Petroleum Minister said this after being given a rousing reception by BJP workers here on his arrival after being reelected to the Rajya Saha. He is credited to be the first Odia leader elected to the Parliament’s Upper House twice from outside the home State, first from Bihar and now from Madhya Pradesh.

Party activists and supporters welcomed Pradhan on his arrival at the Biju Patnaik International Airport and escorted him in a massive rally to the party State office.

“The BJD’s Bijepur win is like a lamp burning brighter before its moment of extinguishing,” said Pradhan.

He slammed the State Government for forming the Biju Yuba Bahini, saying that the force has been formed to sub-serve interests of the ruling party.

In his reaction, BJD vice-president Debi Prasad Mishra refuted Pradhan’s allegations against the Chief Minister for being pro-Congress.