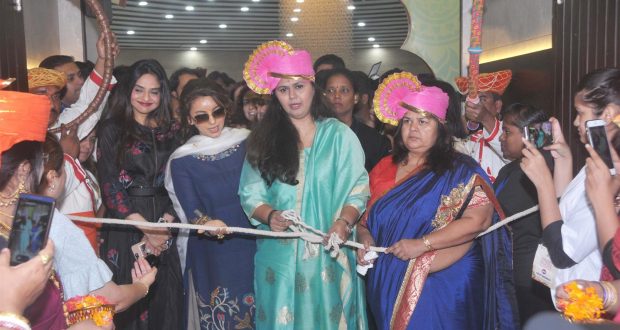 in National March 17, 2018 Comments Off on 1st Mumbai Edition of Women of India Organic festival in Mumbai inaugurated 1,166 Views

Mumbai:17/3/18:Ist Mumbai Edition of Women of India Organic Festival 2018, organised by Mahila Arthik Vikas Mahamandal, Maharashtra and with the support of Women & Child Development Ministry, Government of India is inaugurated in Mumbai today. This year’s theme of festival is “Good for Women; Good for India; Good for You”

Speaking in the press conference after inauguration of festival, Juhi Chawala, brand Ambassador of the Organic Women Festival 2018, said, “If we have to secure our next generation from chemical products and the various diseases like cancer, High per tension, diabetes etc., we need to adopt organic farming and organic products. Organic plants and foods are having contain higher amounts of salicylic acid which fights bowel cancer and the hardening of arteries that leads to heart conditions, strokes and other ailments”

Addressing to the gatherings, Ms. Chawala further said that, “the festival is intended to highlight the health & environmental advantages of organic goods, provide platform for women engaged in production process and boost the development of sustainable & easily accessible sales outlets for women producers from the remote corners of India”.

Smt. Nandita Mishra, Economic Advisor, Union Ministry of Women & Child Development said in the press conference that, under the leadership of Smt. Maneka Gandhi, Union Minister of Women & Child Development, this is the first edition after New Delhi where the Organic Festival of Women is being celebrated. This is the platform for the millions of women and farmers to know about the scientific information and clear their doubts. She further said that, her ministry has believe that, such kind of festival will give boost to the grass root women and farmers. She asked women to participate in such festivals and spread awareness about organic foods and farming information all over the world.

Answering to the question of why organic food grains like cereals, jawar, maza are more expensive than regular grains?, Smt. Juhi Chawala said, organic seeds are costly therefore; further process of production become costly but in the government organic stores, all products are available in reasonable prices. There is lack of awareness among the people about organic food grains.  Such types of Organic stores needs to be known by the common people.

Backgrounder: “Women of India Festival2018” is celebrated since 2015. This is the third year, which is organised in the Mumbai by Mahila Arthik Vikas Mahamandal, Maharashtra. Around 500 women from all over India are participating in these 5 days event from 16 th to 20th March 2018. The organic products include pulses, cereals, spices, cosmetics, oils, honey, pickles and preserves, tea, organic seeds, composters, among other bio-products are available for sale.