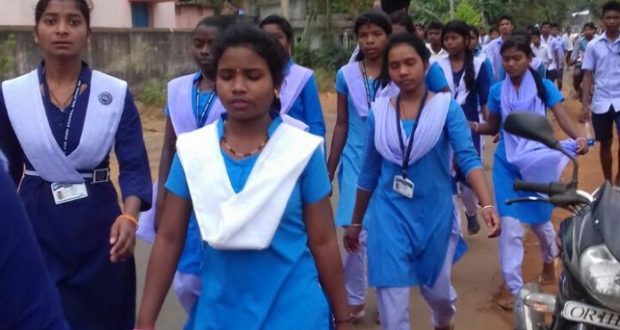 Baripada:16/3/18: The students of a government-run residential school for tribal children from a perennially backward pocket of Odisha’s Mayurbhanj district today braved sultry summer and trekked more than ten kilo metres to air their grievances with the district administration.

55 students majority of them being girls from Balidiha village left for the collector’s office leaving both the civil and police administration in a quandary.

The students’ protest paid dividends with authorities suspending the school headmaster on dereliction of duty.

District Welfare Officer, Krupasindhu Behera said “The students’ grievances are being addressed to. On directions received from District Collector, the headmaster of the concerned school has been suspended. The government is sending additional teachers to the school to improve academics in the school”.

The grievances of the protesters from S.S.D Sevashram School were manifold.

The living condition was Inhospitable in the school. Food quality served to them was substandard. Medical care was eluding them, rued a cross section of agitating students.

We were left with no option but to march to the Collector’s office on foot. The school authorities had turned a blind eye towards our plight. Our parents had also drawn the attention of block level authorities. But it was of no avail, they said.

Informed of the students’ march, police and officials of district welfare office, which shoulders the administrative responsibility of the tribal residential schools, have moved to walk side by side with the students to ensure the safety of students.