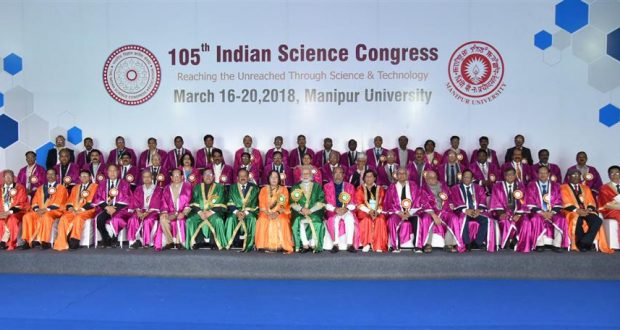 The Prime Minister said let us also join the world to mourn the death of one of the greatest physicists of our time, Stephen Hawking – one of the brightest stars of modern cosmology. He was a friend of India and had visited our country twice. The common man knows Hawking’s name, not because of his work on black holes, but because of his unusually high commitment and spirit against all odds. He will be remembered as one of the world’s greatest motivators of all time, he added.

Shri Modi said that he was happy to be here in Imphal today, on the occasion of the one hundred and fifth session of the Indian Science Congress and delighted to be among scientists, whose work paves the way for a better tomorrow. The University is emerging as an important center of higher education in the North-East. This is just the second time in over a century that the Indian Science Congress is being held in the North-East. This is a testimony to the resurgent spirit of the North East. Earlier, addressing the gathering, Union Minister of Science & Technology Dr.  Harsh Vardhan said that the Government’s aim is to deliver the benefits of Science & Technology to the last man in the society. Dr. Vardhan pointed out that reaching the unreached and inclusion of the excluded are important components of this Government. “Given that, the theme of this Session “Reaching the Unreached through Science & Technology” is very appropriate”, he added.

Earlier, State Chief Minister Shri N Biren Singh, while addressing the gathering lauded all the organizers of the science congress.

Governor of Manipur Dr Najma Heptulla, MOS for the Ministry of DONER, Dr Jitendra Singh, Vice Chancellor of Manipur University, Prof. Adya Prasad Pandey were on the dais of the inaugural function. Prof. Achyuta Samanta, General President of ISCA gave the keynote address. Senior officials of the Union and State government, and scientists from the country and abroad also attended the inaugural function.

The five day-long mega event will conclude on the 20th of this month.

Bhubaneswar:25/1/22: As many as 22 police personnel in different ranks from Odisha have been selected to receive prestigious police medals on the occasion of Republic Day-2022 tomorrow. The Ministry of Home ...