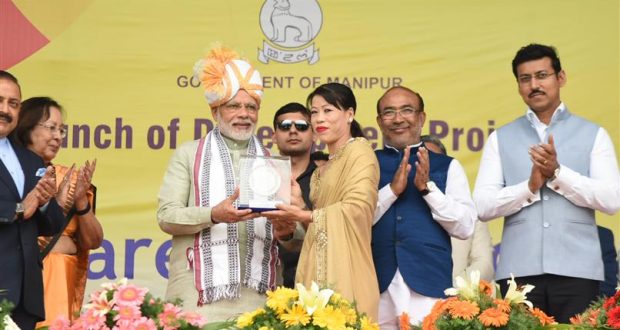 Addressing the enthusiastic gathering, the Prime Minister complimented the State Government for the work done by it over the past one year.

He said the projects launched today are related to the aspirations and talent of the youth, their employment, women empowerment and connectivity. He said the National Sports University is being established, keeping in mind the talent and sporting capability of the youth in the North East. He urged the youth of Manipur to take maximum advantage of the recently launched Khelo India Initiative. He also complimented Manipur for its good performance in the recently concluded Khelo India Games. He said the Multi Sports Complex would offer opportunities for training and competitions.

The Prime Minister said Manipur has shown how sports can become a means of women empowerment. He appreciated famous sportspersons of the State including Mirabai Chanu and Sarita Devi. He also appreciated other initiatives for women empowerment taken by the State Government. In this context, he also mentioned the 1000 Anganwadi Centers whose foundation stone was laid today. He spoke about the recently launched National Nutrition Mission.

The Prime Minister said that the Central Government has given a huge thrust on improving the infrastructure in the region. He spoke of initiatives taken for improving road and rail connectivity in the region.

The Prime Minister appreciated the citizen-centric initiatives of the State Government, including for structured interaction and resolution of public grievances.

The Prime Minister recalled that it was in April 1944, in Manipur, that Netaji Subhas Chandra Bose’s INA gave the clarion call for freedom. He said that today Manipur has decided to play an important role in the rise of a New India.