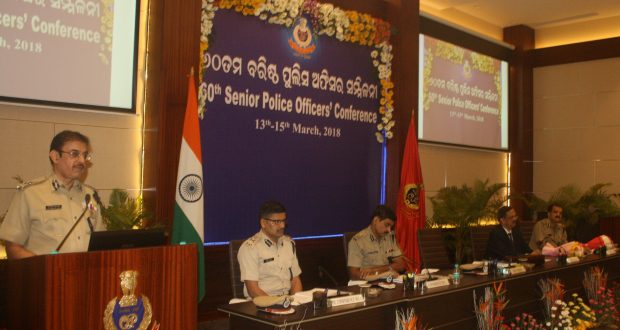 Odisha police stressed on extensive use of technology

in Smartcity Bhubaneswar March 13, 2018 Comments Off on Odisha police stressed on extensive use of technology 665 Views

Bhubaneswar:13/3/18; Odisha police stressed on extensive use of technology to deal with the recent challenges faced by cops in maintaining law and order, organised crimes and other new emerging trends including cyber crimes at the 60th Senior Police Officers’ Conference of the Odisha police at the Police Bhawan here on Tuesday.

Discussion on professional policing matters like law and order situation in the State, anti-Maoists strategy, effective use of social media, capacity building of police stations, crime control measures, people-friendly policing and ethical behaviour in policing will be discussed in the conference.

Odisha Director General of Police (DG) RP Sharma inaugurated the conference that will continue for three days will be attended by SPs of all districts, DCPs, Commandants of all Armed Police Battalions, Range IGs, DIGs and under-training IPS officers.

“Odisha Police should continue with its efforts to improve its public relation and increase public confidence. Our endeavour should be to work without fear or favour and provide a sense of security to the people. Our police stations should be people-friendly, accessible and inclusive,” said DGP in his opening address.

Similarly, Sharma appealed the cops to hone their skills to deal with the new forms of crimes like cyber-attack.

Senior officers of various police establishments are also participating in the conference that conclude on March 15.

2018-03-13
Editor in chief
Previous: Naveen Patnaik in a programme ‘Juhaar Bijepur’ at the Barpali
Next: Nomination papers of three BJD candidates were found to be valid