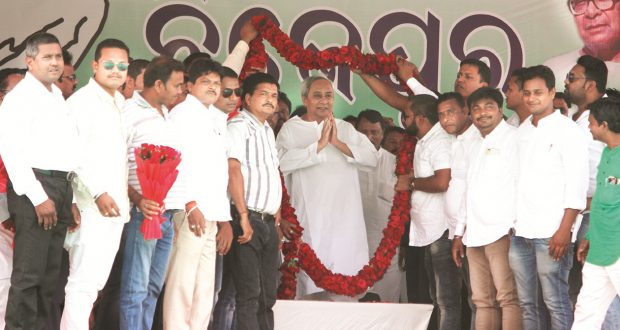 Naveen Patnaik in a programme ‘Juhaar Bijepur’ at the Barpali

Barpali:13/3/18: Chief Minister Naveen Patnaik in a programme ‘Juhaar Bijepur’ at the Barpali high school ground thanked the people of the entire constituency for extending their wholehearted support to the BJD and reposing faith on its candidate Rita Sahu in the recently concluded by-election.

Reiterating his earlier election speech, Patnaik said, “The development of Bijepur is my responsibility now.”

“The people of Bijepur have accepted the path of progress. At the same time, they have given us an added responsibility by bringing victory for the BJD candidate at an unexpected margin,” said Patnaik in a vast public meeting at Barpali in presence of the winning candidate Sahu and all other senior leaders of the party. “All the assurances given by me during the election campaign will be carried out in letter and spirit. At the same time, I will personally review the project works and all other developmental activities in the constituency,” assured Patnaik to the people.

Looking at the past experience, massive police arrangements were made in Barpali and police detained some BJP leaders as preventive measures.

In the first hour of his visit, Patnaik dedicated the 170 km long Biju express highway to the people of the State constructed in the first phase from Sambalpur to Rourkela via Jharsuguda and Sundargarh towns.

“With this ultra modern road, a new era of progress and prosperity will begin in Odisha connecting western parts to that of the southern end with a total length of 650 km,” he said.