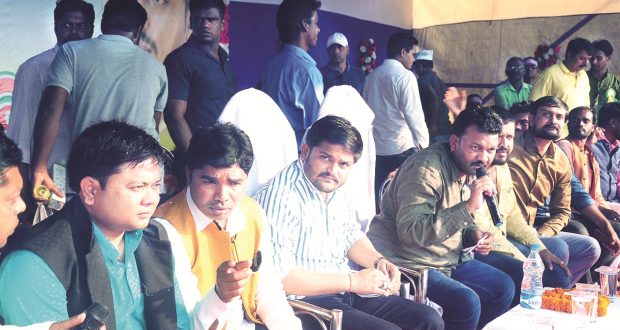 Baripada:12/3/18; A “Kudumi Adhikar Rally” was held here on Sunday by the Odisha Kudumi Sena in order to support the Scheduled Tribe (ST) status demand for the Kudumi (Mohanta) community in the presence of Gujarat Patidar movement leader Hardik Patel.

Speaking on the occasion, Patel strongly supported the Kudumis’ ST status demand and assured that he would discuss the matter with Chief Minister Naveen Patnaik.

Notably, there are about seven lakh Kudumis in Odisha, mainly in Mayurbhanj district. The Baripada rally was also attended by many Kudumi leaders from neighbouring States.

2018-03-12
Editor in chief
Previous: Thousands of farmers under the banner of Navnirman Krushak Sangathan resorted to a dharna for indefinite period
Next: Union Petroleum Minister Dharmendra Pradhan filed his nomination paper for the upcoming Rajya Sabha