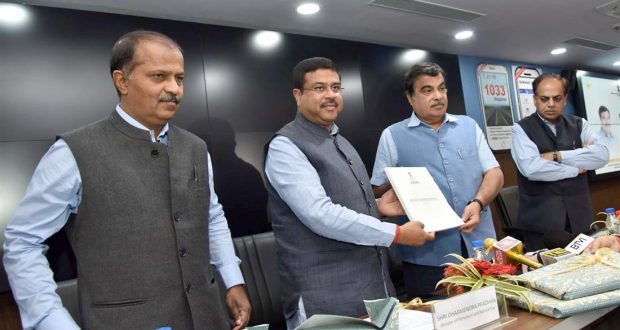 Newdelhi:6/3/18;Petroleum Minister Shri Dharmendra Pradhan has emphasized the importance of research to promote the use of biofuels. In his inaugural speech at the “EU-India Conference on Advanced  Biofuels” here today Pradhan said while there are challenges in promoting advanced biofuels but it also offers business oppurtunities worth one lakh crores in the ‘waste to wealth’ sector. He emphasizes the need for synergies to enable industrialization of biofuels so that there are economies of scale. Pradhan said while India is among the less polluting countries dacarbonizing the energy sector is important and several steps are being taken in this direction by his Ministry.

For India, in the future, biofuels would be the cost-effective, pollution-free import substitute to polluting fossil fuels. While first generation biofuels are made from sugars via molasses and vegetable oils, advanced biofuels are made from lignocellulosic biomass or woody crops, agricultural residues and municipal waste. Elaborating on this he said we are committed to reaching the target of 10 percent blending of ethanol in petrol by the year 2022.He also said 12 bio-refineries are being set up in the country by the Oil PSUs to enhance the ethanol production capacity.

Noting that biofuels in India are currently “only made from molasses”, Pradhan pointed out that Budget 2018-19 presented last month had announced incentives for “waste-to-wealth” conversion projects, including the Gobar Dhan scheme focused on producing bio-CNG.

The aim of the two day Conference is to facilitate the market deployment of advanced biofuels to enable commercialization of Advanced Biofuel Projects by improving the dialogues between the research community and technology developers of both sides.

Delegates, Scientists and Energy Experts from 15 countries are attending the conference which include technology providers, Transport specialists, researchers, academicians, biofuel associations and other stake holders.