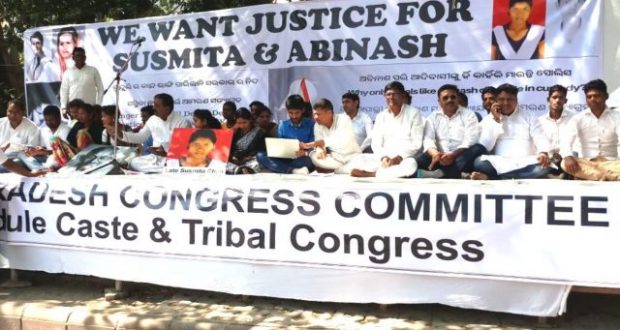 in NRO March 6, 2018 Comments Off on SC and ST Cell of Odisha Pradesh Congress Committee launched an indefinite agitation at the Jantar Mantar 1,064 Views

New Delhi:6/3/18; The SC and ST Cell of Odisha Pradesh Congress Committee launched an indefinite agitation at the Jantar Mantar here on Tuesday demanding a CBI probe into the Kunduli case.

They alleged that the state government has failed to give justice to the tribal girl and trying to suppress the matter slowly. They are slated to meet President of India Ramnath Kovind and seek his intervention into the matter.

“Since we failed to get justice from the Odisha government, we began an indefinite agitation here today. We will continue our stir till Susmita Chhati and Abinash Munda get justice. We will meet the President of India and give him all information how the SC and ST people are meted out atrocities by the Odisha government. Instead of investigating the rape cases, it is suppressing the matter,” alleged Majhi while speaking to the newsmen.

2018-03-06
Editor in chief
Previous: Lingaraj Temple authorities lodged an FIR against Bollywood actress Raveena Tandon
Next: State Election Commission announced April 3 as the date for holding of elections to NACs of Hindol, Atabira and Nuapada