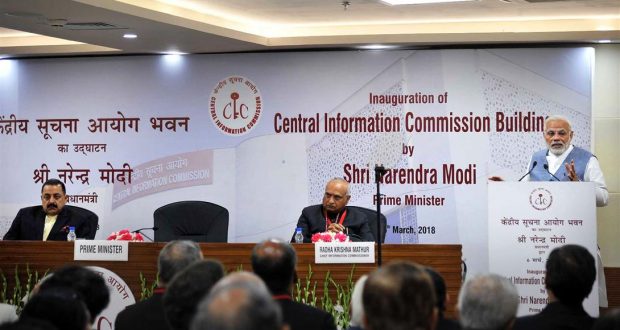 He noted that the building had been completed before the due date, and congratulated all agencies involved in the construction. He said the environment friendly Griha-IV rating would ensure energy savings, and help conserve the environment.

The Prime Minister expressed hope that the new building would help in better coordination and integration in the working of CIC.

Talking about the launch of the mobile App of the CIC, the Prime Minister said this would enable citizens to file appeals with ease, and enable them to easily access information being made available by the Commission.

The Prime Minister said democratic and participative governance requires transparency and accountability. He said CIC plays a key role in this regard. He said such institutes work as catalysts for trust-based governance.

The Prime Minister said that an “empowered citizen” is the strongest pillar of our democracy. He said that over the last four years, the Union Government has been informing and empowering people through various means. He enumerated five pillars of the modern information highway.

He said the first pillar is to ask questions (Sawaal). In this context, he mentioned the MyGov citizen engagement platform. The second pillar is listening to suggestions (Sujhaav). He said the Government is receptive and open to suggestions received from CPGRAMS or on social media.

The third pillar is interaction (Sanvaad). He said this establishes a connect between the citizens and the government. The fourth pillar is activity (Sakreeyta). The Prime Minister said that during the implementation of GST, there was active follow up on complaints and suggestions.

The fifth pillar is information (Soochna). The Prime Minister said that it is the Government’s duty to inform citizens about its actions. He said the Government has begun a new practice of providing information through real-time updated, online dashboards. Information on progress of schemes such as Saubhagya and Ujala has been made available, he said.

The Prime Minister said information commonly asked for is being uploaded on web portals of the concerned departments and Ministries. He said digital technology is being used to improve transparency and quality of citizen services. Similarly, projects are being tracked in real-time. He said that in a meeting of PRAGATI last week, the progress of reconstruction works at Kedarnath was monitored through a drone camera. He said the PRAGATI meetings have helped speed up projects worth over 9 lakh crore rupees.

The Prime Minister gave the example of the closing down of the Directorate General of Supplies and Disposals. He said that public procurement is now being done through the Government e Market, or GeM platform. This is helping end corruption and bring transparency in government procurement, he added. He also spoke of minimizing human interface in government-people interactions.

The Prime Minister said that as transparency in the system increases, there is more trust in the government.

He said that citizens should be aware both about their rights and their duties. He said that the CIC can also explain to people, the importance of “Acting Right.” He said that in the quest for rights, it is important not to forget duties. He said that keeping in mind the present conditions and future challenges, every responsible institution should balance its rights with its duties.

2018-03-06
Editor in chief
Previous: RashtrapatiBhavan hosted a one-day meet of Directors of IISc- Bangalore, IITs and IISERs.
Next: 40 Participants of Indian Origin from Nine Countries call on Union Minister of Railways & Coal