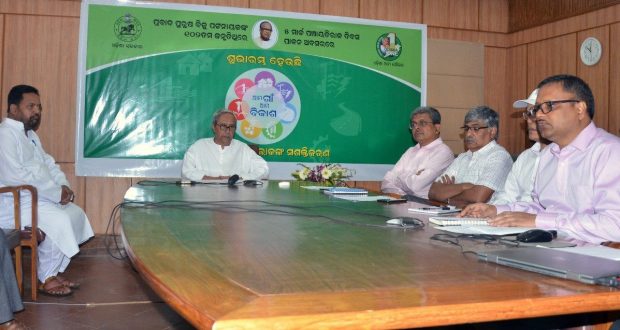 Bhubaneswar:6/2/18;On Panchayati Raj Divas, Chief Minister Shri Naveen Patnaik  inaugurated AmaGaonAmaBikash programme to connect directly with people on the ground. Projects worth ₹2Cr were sanctioned in Sambalpur, Koraput, Ganjam and Jajpur districts, based on real-time feedback from people during the video conferencing. Highlights from Chief Minister’s address at the event:

• This initiative is a tribute to Biju Babu on his birth anniversary and his lifelong efforts to empower people and villages
• Chief Minister will hold such sessions twice a week, connecting with different Gram Panchayats every week
• GPs of Rengali, Sanakuda, Narayanpatna and Khairabad were chosen based on parameters like infrastructure development, necessities and public feedback
• State-of-the-art ‘Video Wall’ installed in CM’s Office and mobile video conferencing vans launched for facilitating direct communication between people and the State Secretariat
• Under the programme, projects with a minimum value of ₹1 Lakh and up to a maximum of ₹10 Lakh will be sanctioned

Chief Minister stated that the project will establish a direct connect between highest level of administration with the people and enhance participation of people and PRI members in development activities.