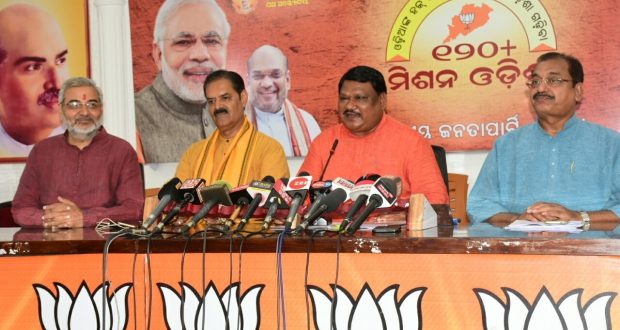 in State News March 5, 2018 Comments Off on Odisha BJP reiterated its confidence of wining 120+ seats in the 2019 Assembly elections 1,121 Views

Bhubaneswar: 5/3/18:After thumping results in three north eastern states, the state BJP, which was mum following Bijepur result, today reiterated its confidence of wining 120+ seats in the 2019 Assembly elections in Odisha.

The organisation that had awarded former Tripura CM Manik Sarkar also felicitated Odisha CM Naveen Patnaik. We have already defeated one and we hope people of Odisha will give opportunity to dethrone another in 2019, said Oram.

Commenting on BJP’s performance in Bijepur by-election, Oram said we have just lost the by-poll but not died.

However, commenting on the statements of Union Minister Jual Oram, BJD leader and agriculture minister Pradeep Maharathy said, “BJP will never come to power in Odisha.”