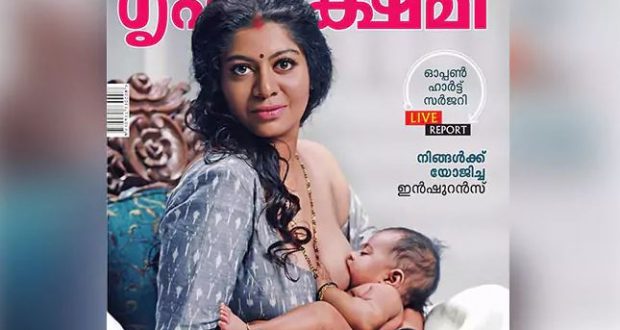 NEW DELHI:2/3/18:  For two days, the cover of the very popular Malayalam magazine Grihalakshmi has been the centre of debate on social media. The reason? A woman breastfeeding a baby is its cover photo. The magazine claims it is the first time an Indian publication has put the image of a woman breastfeeding on the front cover. The image is part of a campaign called “Breastfeed Freely,” which aims to stop shaming women breastfeeding in public but the decision to use a model who is not a mother herself is a major point of contention among many netizens.

The magazine’s March issue features a striking image of Dubai-based actor and model Gilu Joseph staring straight at the camera, with a baby at her breast. The text on the cover reads: “Mothers tell Kerala: please stop staring, we need to breastfeed.” Defending her decision to appear as a breastfeeding mother, Ms Joseph says breastfeeding in public often causes women to face discrimination and discomfort.

“Society doesn’t provide an environment for women to breastfeed in public and feel safe while doing it,” she says in a video posted on Facebook by Grihalakshmi. “It’s“I had no second thoughts about doing this shoot, despite being a woman who is not married and is not a mother,” Ms Joseph adds. “It is for a good cause.” Grihalakshmi’s editor Moncy Joseph tells BBC the idea for the magazine cover came after the photo of a woman breastfeeding her child, posted on Facebook by her husband, went viral. a privilege mothers have – feeding their child – you don’t have to be afraid or ashamed.”

2018-03-02
Editor in chief
Previous: Prime Minister Narendra Modi gave a heart warming welcome to King Abdullah II of Jordan
Next: In a major success to security forces engaged in anti-Maoist operations:12 Maoists gunned down in encounter