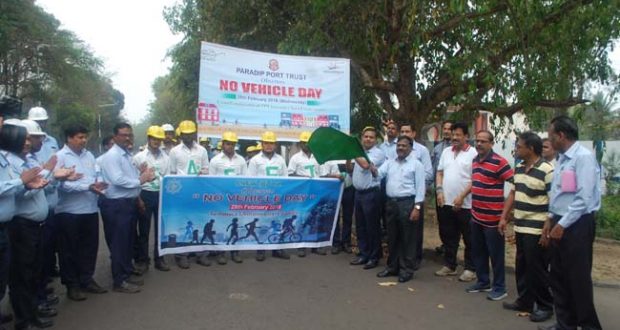 Paradip:1/3/18; In an attempt to maintain ambient environment standard and reduce the usage of carbon fuel in the port, the Paradip Port Trust (PPT) authorities today undertook a novel initiative in observing ‘no vehicle day’.
All the employees of the major port either walked or pedalled their way to port office.
As part of ‘no-vehicle-day observance, residents of the seaport township had been called upon to give their two-wheelers and four-wheelers a miss for a day and opt for bicycles for commuting. However the appeal did not elicit wholehearted public response. Still it’s heartening to note that some of the local residents opted for bicycles for commuting, said port officials.
The initiative will help to create awareness among the public and also reduce the traffic congestion and enable PPT officers and employees to play active role in reducing the global warming. No vehicle made its way into the administrative building premises. Besides the employees, workers stakeholders, port-users were sighted pedalling bicycles to go to their respective workplaces inside the prohibited area of the port.
PPT has taken a positive environment-friendly initiative even though vehicular pollution has not assumed alarming proportion in Paradip, said Regional Officer, State Pollution Control Board, Mukesh Mahaling.
Rinkesh Roy, Chairman, PPT led from the front by walking to the office all the way from his official quarters.
Port has joined the drive against pollution for clean environment. That’s why, no-vehicle-day was observed today. We want to promote walking, riding bi-cycle and commute via public transport instead of own vehicles among residents, PPT Chairman Rinkesh Roy said.