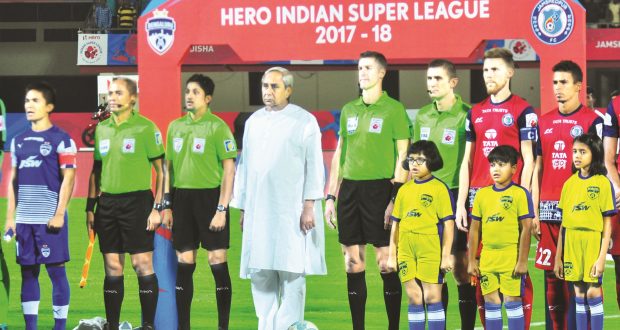 Bhubaneswar:26/2/18; Chief minister Naveen Patnaik on Sunday attended the inaugural ceremony of Indian Super League match at the Kalinga Stadium with the city being gripped with fan frenzy after Bengaluru FC’s 2-0 win over Jamshedpur FC.

The crowds started thronging the stadium hours before the match. Though the stadium has a capacity to seat 12,000 , it was not full to capacity. Sports department sources said around 75 per cent seats were occupied.

Jamshedpur FC, the Tata Steel-owned side, has adopted Kalinga Stadium as its second home ground for its debut campaign in the league.

However, two goals in the first half put Bengaluru FC in the driving seat as the home side lost momentum. Having gone down to Jamshedpur FC at home in the first leg fixture, the Blues were keen to exact revenge and managed to redeem themselves.

The match was billed as attack versus defence with Bengaluru FC boasting the best goal count, while Jamshedpur FC had the best defence. In the end, however, it was the league leaders that prevailed.

Police had also made elaborate arrangements. Traffic was restricted on the stretch connecting Behera Sahi Square and Nicco Park Sqaure from 4pm to 11pm.