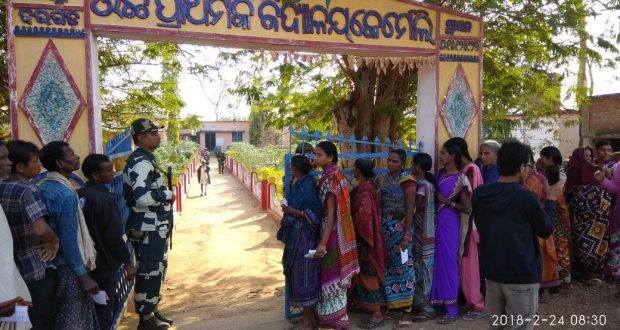 Bijepur Assembly constituency by poll ended peacefully: results would be declared on February 28.

in District Diary February 24, 2018 Comments Off on Bijepur Assembly constituency by poll ended peacefully: results would be declared on February 28. 646 Views

Bargarh: 24/2/18;The voting for the bypoll for Bijepur Assembly constituency in Odisha’s Bargarh district ended peacefully at 5 PM today with voters turning out in large numbers.

While the total voters turnout was 81.86 percent in last assembly election in 2014, this time the total polling recorded till 5 PM was 72 percent.

The voters queued up outside polling booths much before 8 AM when the voting was to start officially.

About 2.21 lakh voters were slated to exercise their franchise in 281 polling booths which would decide the fate of 13 candidates, including BJD’s Rita Sahu, BJP’s Ashok Panigrahi and Congress’ Pranaya Sahu.

The by-election fever has gripped the State as all the three major political parties are facing the first by-poll after 2014 Assembly elections.

People across the State have glued to television sets from the morning to get informed about each happening of the by-election.

Voting in booth no- 88, 102, 141 in Bijepur block and booth no 20 in Barpali block was interrupted after technical glitches developed in Voter Verifiable Paper Audit Trail (VVPAT) machines, which are being used for the first time in the by-poll.

Along with 36 platoons of police force, five companies of central paramilitary forces had been deployed in the district to maintain law and order during the polling, official sources said.

The results of the by-poll would be declared on February 28.

2018-02-24
Editor in chief
Previous: No MIL question paper leaked
Next: BJD party would take care of all expenses of the kin of Dileswar