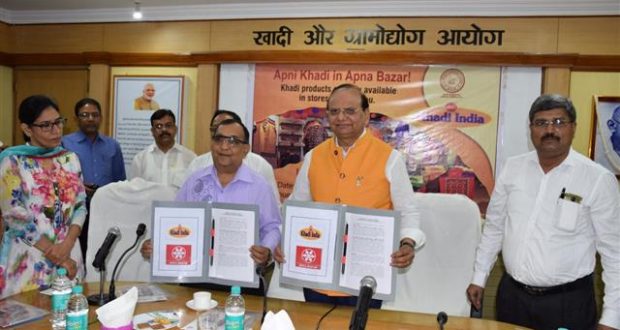 Mumbai:21/2/18;Khadi lovers can now buy Khadi products from a ‘Khadi Korner’ at Apna Bazar at Charkop Mumbai suburb. This has been made possible, thanks to an agreement between Khadi and Village Industries Commission (KVIC) and Apna Bazar. The agreement was signed by Shri I. Jawahar, Director (Marketing), KVIC and Shri S. T Kajale, CEO, Apna Bazar in the presence of Shri   V.K. Saxena, Chairman, KVIC and Shri Anil Ganger, Chairman, Apna Bazar. The first Khadi shop-in-shop by Globus was opened earlier at Great India Place Mall, Noida and the second one in Ahmedabad.

Speaking on the occasion Chairman, KVIC said that KVIC is exploring all possible methods to bring Khadi to the door steps of customers. He said that the plan is to establish Khadi Korners in major retail showrooms and malls such as Shoppers’ Stop, Star Bazar, Infinity Mall, Pantaloon and Big Bazaar. He said that the tie-up with Apna Bazar will not only make Khadi available to more people but will also increase its production which will in turn help increase income of artisans. Shri Saxena added that KVIC is very cost-effective and price-competitive and does not compromise on product quality.

Briefing on this tie-up Apna Bazar Chairman Shri Anil Gangar said that if Khadi products are sold in all outlets of Apna Bazar, it will have tremendous impact in increasing Khadi sales. Citing increase in sales figures, he said that one could clearly see that youth, elderly and women of every age group are taking to Khadi today.