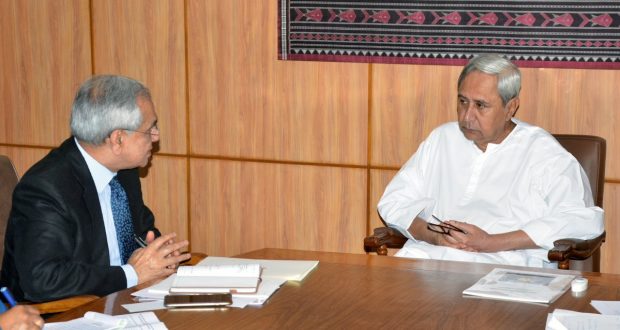 Patnaik also urged the Niti Aayog Vice-Chairman for revision of coal royalty and open bank branches in 4376 unbanked Gram Panchayat in the state.

Besides, the Chief Minister requested Rajiv Kumar to expand mobile network in 11,200 villages and broadband connectivity in the Maoists affected districts of the state.

Restoration of Central assistance for Special plan for KBK, IAP and BRGF districts and hike of the Centre’s share in the State Disaster Response Fund (SDRF) from 75% to 90% with effect from 1st July, 2017, are the other demands which the Odisha CM placed before the Niti Aayog Vice-Chairman.

The Chief Minister also said that Under PMGSY Scheme, for 38 LWE Blocks, the population range norm for up-gradation of the existing roads should be relaxed to 100 and above. He also demanded adequate funds for development and maintenance of National Highways.

He further demanded the Railways to speed up the execution of the works in the state.

“The Amritsar-Kolkata industrial corridor may be extended up to Visakhapatnam to connect it to Deep Water Ports. This would also facilitate strategic link between carious industrial corridors of the county and there should be advance intimation of the annual allocation for the Central Sponsored Scheme,” he added.

On the other hand, after his meeting with Naveen, the Niti Aayog Vice-Chairman while briefing media informed, “As per the official process of NITI Aayog, we should meet all the Chief Ministers at their respective State capital cities. The aim and objective of it is to convince the Chief Ministers to make NITI Aayog their medium of communication with the Central Government so that the State’s problems are properly addressed.”