Top Headlines
Home » National » Odisha will sponsor the national men’s and women’s hockey teams for the next five years:Naveen Patnaik 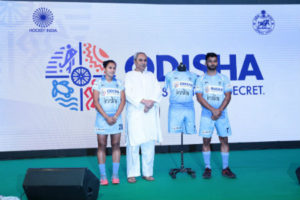 Odisha will sponsor the national men’s and women’s hockey teams for the next five years:Naveen Patnaik

in National February 15, 2018 Comments Off on Odisha will sponsor the national men’s and women’s hockey teams for the next five years:Naveen Patnaik 781 Views

The CM also unveiled a logo that will don the new jerseys of Team India’s Men’s and Women’s hockey teams. Speaking on the occasion, Patnaik said, “We are delighted at this association with Indian hockey and we thank Hockey India to have given us this platform. Hockey in Odisha is more than a sport; it’s a way of life, especially in our tribal regions, where children learn to walk with hockey sticks. No wonder, Odisha has produced India’s finest hockey talent. This is a first where a state government will not just be promoting a sport within its boundaries but will support and nurture the Indian Hockey Teams. This is Odisha’s gift to the nation.”

Patnaik further added, “We would like this association to help widen the net for Hockey in India and to ensure that all Indians get behind the national sport. We hope that Odisha’s association with national hockey coincides with a golden period for the sport. We are looking forward to all the nations playing the Hockey World Cup in Bhubaneshwar this year. We extend a warm invite to everyone to see team India in action.”

The newly designed logo on the Indian national hockey team jersey is a summation of Odisha. At its heart the Konark Wheel: a symbol of progress and empowerment, the land of the rising sun, the famed coastline that has for centuries been a trade route and even today welcomes the endangered Olive Ridley turtles, the Odissi dance form and hockey which unites the entire state.

Mariamma Koshy, President, Hockey India said, “We are delighted to associate with Govt. of Odisha and we are confident that this association will be a boon for further developing the sport of Hockey in India and bringing more glory to the country. As the team gears up for the Odisha Men’s Hockey World Cup we urge one and all to extend their cheer to Team India and support their quest to bring the World Cup home.”

Ministry of Coal with the support of Power, Steel and Mines Ministries organizes National Mineral Congress in Bhubaneswar

Newdelhi:28/5/22:The Centre will develop a framework to keep check over fake reviews on E-Commerce websites. The Department of Consumer Affairs (DoCA) after studying the present mechanism being followed by the ...