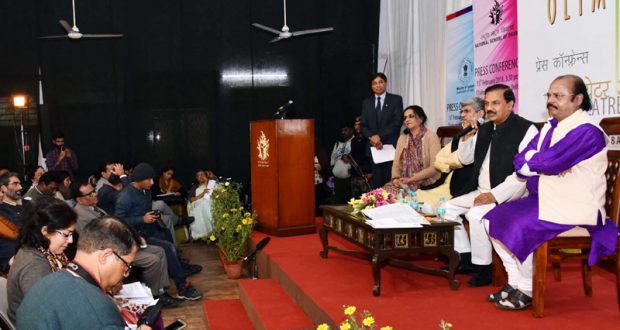 The Minister of State for Culture (I/C) and Environment, Forest & Climate Change, Dr. Mahesh Sharma addressing a press conference on 8th Theatre Olympics, organised by the National School of Drama, in New Delhi on February 13, 2018.

The Vice President, Shri M. Venkaiah Naidu to inaugurate the Global Theatre Olympics being held in India for first time on 17th February 2018

in National February 14, 2018 Comments Off on  The Vice President, Shri M. Venkaiah Naidu to inaugurate the Global Theatre Olympics being held in India for first time on 17th February 2018 789 Views

Newdelhi:14/2/18;The Vice President of India, Shri M. Venkaiah Naidu will inaugurate the 8th Global Theatre Olympics on 17th February, 2018 at the majestic Red Fort in New Delhi. This Global Theatre Festival is being held in India for the first time. Addressing media persons at the National School of Drama in New Delhi today, the Minister of State for Culture (I/C) and Environment, Forest & Climate Change, Dr Mahesh Sharma said that it is for the first time in the history of independent India that a theatre festival of such a large magnitude is being organized. The 51 days long event will travel to 17 Indian cities with 450 shows, 600 ambience performances and 250 power packed youth forum shows. 25000 artists from across the globe will participate in the festival which will conclude on 08th February, 2018 with a grand ceremony at the iconic Gateway of India in Mumbai. Dr. Mahesh Sharma also thanked the International society for giving India the opportunity to host the extravaganza. Theatre has great appeal and it is possible to highlight everyday life including its social problem through the medium of theatre in a very simple manner, Dr. Mahesh Sharma said.

Speaking on the occasion, the Acting Chairman of National School of Drama Society, Dr. Arjun Deo Charan said, “We are extremely proud to bring the world’s largest theatre festival to India. During this 51-day long nationwide celebration of the 8th Theatre Olympics, we attempt to bridge the borders across countries through the call of theatre and engage in creating a global village”.

Prof. Waman Kendre, Director, National School of Drama said “We should be proud of our theatre legacy that is more than 2500 years old. This illustrious event provides a unique opportunity for cultural exchange through the medium of theatrical art. With this international event, we wish to express our theatre practices, its variations, philosophies and the sheer strength of our texts, narratives and ways of presentation in front of a global audience. In return we extend our arms to welcome the practices, ideologies and philosophies of visiting performers. The objective is to create a platform for conversation between voices of Indian and global artists with an intent to enrich our collective understanding and expression of art,”.

The theatrical extravaganza is being hosted in India by the National School of Drama under the aegis of Ministry of Culture, Government of India. The theme of the 8th Theatre Olympics is “Flag of Friendship” that aims to bridge borders and bring people of different cultures, beliefs and ideologies together through the medium of theatrical art. The 8th Theatre Olympics is being organized with a budget of Rs.51.81 Crore and the performances will be held in 30 Indian languages, 15 foreign languages as well as non-verbal languages.

Numerous allied activities like exhibitions, symposia, ‘Interface’ and workshops with well-known academicians, authors, actors, designers and directors are scheduled to take place across 17 cities. The allied programs would boast of 60 ‘Living Legends’ series and 50 ‘Master Classes’. The 8th Theatre Olympics would also include 2 international seminars in Delhi and Mumbai with 6 national seminars in Bhopal, Bengaluru, Chandigarh, Jaipur, Kolkata and Varanasi. Theatre and film veterans of the likes of Shabana Azmi, Paresh Rawal, Manoj Joshi, Himani Shivpuri, Seema Biswas and Saurabh Shukla will also take part during this grand theatrical treat.

The Theatre Olympics was established in 1993 at Delphi, Greece. Being an international theatre festival, the Theatre Olympics presents some of the greatest theatre practitioners from around the world. It is a platform for theatrical exchange, a gathering place for students and masters, where a dialogue despite ideological, culture and language differences is encouraged. Since 1993, the Theatre Olympics has been held seven times in the following countries: Japan (1999), Russia (2001), Turkey (2006), South Korea (2010), China (2014), Poland (2016). The theme of the latest edition of Theatre Olympics being held in India is “Flag of Friendship”. This most awaited event of world theatre in India attempts to bring all the creative minds from across the globe to this ‘NatyaMahakumbh’.

The National School of Drama is the torchbearer of theatre in India and has trained some of the most respected actors and theatre stalwarts of all time. Established in 1959, it has a proud legacy spanning over six decades of theatrical perfection. Hosting the 8th Theatre Olympics adds another feather to the cap of this history institution.