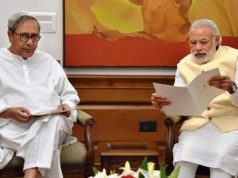 Naveen, who left for the national capital on a 4-day visit earlier in the day, called on the PM at around 6.30 pm. The meeting lasted for 20 minutes and where the CM has given the recently released book on Biju Patnaik (Naveen’s father and former Odisha Chief Minister) to Modi.

“I met the Prime Minister for 20 minutes and it was a courtesy call. I gave him the recently published book on Biju babu, a biography on Biju babu. And, we discussed on Biju babu for a while,” Naveen told reporters soon after the meeting.

When asked is there any discussion took place on Polavaram issue, the CM said in negative. “There was no discussion of that kind. It was just a courtesy call,” he added.

The meeting, however, has raised many eyebrows and left political observers stunned as the BJP has been blasting the State government over various issues terming Naveen’s BJD has failed to bring development in the State in the last 18 years.

Patnaik had said that he would attend a high-level review meeting in New Delhi on the upcoming men’s World Hockey Cup which is scheduled to be held in Odisha.

2018-02-14
Editor in chief
Previous:  The Vice President, Shri M. Venkaiah Naidu to inaugurate the Global Theatre Olympics being held in India for first time on 17th February 2018
Next: Anubhav Mohanty’s starrer Premi No.1 is all set to recreate magic with its re-release