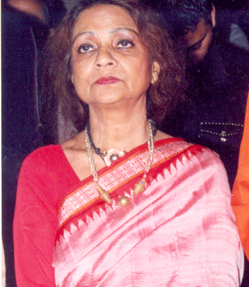 Bhubaneswar:12/2/18;First Odia women Cine Director passes away on 11th,February,2018 Niggt at Private hospital at Bhubaneswar.Ms.Ghose had directed and Produced Odia Film Chha Mana vAtha Guntha which was an adaptation  of Fakir Mohan senapati Novel in the same title.Born on March 28. 1933, Parbati Ghosh made her debut as a child artist in, Sri Jagannath in 1950.

Parbati Ghose a.k.a. Chapala and Chandana was as big a legend as her husband Gour Prasad Ghose in the Odiya Film Industry.

A talented actress in her own right her memorable and powerful performances were at par with national level artistes. She was much adored at the peak of her career and has been showered with numerous awards and accolades. 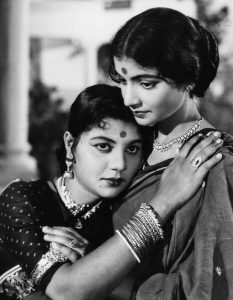 Her husband, Gour Ghose, gave her the platform to become Orissa’s first woman producer and director. Along with him she bloomed as an artiste. She exhibited great strength and overcame her share of hurdles and carried on with the production house even after his demise.

Born in Cuttack, Orissa, she was one of eight siblings. Though a middle class family they were rich in culture and education. Father Late Basudev Naik worked as a manager in the then famous ManMohan Press. During his tenure the noted writers Kanhu Charan Mohanty and Gopinath Mohanty had many of their best selling works published by this press. He was also responsible for the Odiya translation of the Gita, the editions of which are still available. Mother Late Sebati Naik, hailed from Damodarpur, Cuttack, and was a housewife. Though not highly educated herself, she encouraged her children to pursue cultural and academic ambitions.

Chapala received immense support from her parents to follow her passion. Her penchant for acting was first ignited in her school, Sanat Nalini Girls High School, where she vigorously participated in various cultural and social activities. Her teachers adored her and encouraged her to showcase her talent. Years later they honoured her as a Chief Guest at their Diamond Jubilee celebrations. Chapala won her first award of rupees five in a school poetry recital. She took dancing lessons from great exponents like Guru Kelucharan Mahapatra(Odissi), Guru Dayal Sharma and Guru Suresh Routray. From a very young age she participated in a lot of social causes and state celebrations like Rabindra Jayanti etc. She was, by nature, helpful and was known as Chapala Rani in the neighborhood. Being an avid reader and learner she put in great effort and became quite proficient in the Bengali language after her marriage into the Ghose family. This enabled her to enjoy many great Bengali literary works.

Subsequently Chapala got involved (as child artist) in All India Radio and the social/cultural programs of the Praja Socialist Party. She became an ‘A’ grade artiste and got instant fame. Soon she was offered her first onscreen role as a child artiste (NilaMadhava) by the noted singer Dhiren Das for the movie “Shri Jagannath” in 1949. Incidentally, Rai Gour (Gour Prasad Ghose) was also a part of this movie as Shaktidhar.

The huge success of “Shri Jagannath”, was a defining start of her long career. ‘A Star was Born’… In 1953 she was offered the lead role in “Amari Gaan Jhua”(Our Village Girl) opposite Rai Gour produced by Naren Mitra(Utkal Chitra Pratisthan). The movie, which dealt with the perils of Child Marriage, was immensely appreciated as was the lead pair. Gour-Parbati shot to fame as a romantic pair. In 1956, when Rai Gour turned producer with “Bhai Bhai” Chapala was the natural choice for the female lead. Bhai Bhai gave them the opportunity to come in contact with some influential personalities not only from the film industry but also the political and social circle.

Chapala’s next lead role was in “Maa”(about struggles of women) again produced by Rai Gour in 1959. This year became significant as she married Gour Ghose and became Parbati Ghose(name given by her in-laws).

Parbati Ghose went on to create history in cinema, churning out successful and award winning movies one after another. “Laxmi” in 1962, “Kaa” in 1965, “Stree” in 1968, “Sansaar” in 1971. After “Sansaar” the husband wife team announced Fakir Mohan Senapati’s epic novel “Chha Mana Atha Guntha” (Six Acres and a Third) with much fanfare. It was a moving story of the exploitation of the villagers by the Zamindars. The venture inadvertently got delayed due to unforeseen circumstances. However, she was able to revive the project in 1986 and independently produced and directed the same for which she received critical acclaim.

In the interim she kept her passion alive through acting in TV serials and Radio plays. She excelled in this area too and was soon conferred ‘A’ grade status in both . In 1977 she acted in a non home production movie titled “Amar Prem” along with Gour Ghose. The duo returned to home turf, as producer/director with Odiya telefilms, “Samadhan” and “Hawker”, for the Regional Doordarshan, and Hindi telefilms, “Prashna” and “Sopan”, for the Delhi Doordarshan.

In the following years she was actively associated with various literacy programs for the State Resource Centre (SRC) and produced/directed numerous musical videos, short films and documentaries for them. “Saria Pura Ra Sania”, penned by Indu Bhushan Misra, was a musical video based on literacy which created quite a stir amongst the common man. They identified themselves with the character Sania (played by Manoj Panda) and were motivated by the same. In 1996 she made “SalaBeg” for the Films Division.The pivotal role of SalaBeg, a muslim devotee of Lord Jagannath was given shape by Satyaki Misra under the meticulous direction of Parbati Ghose. IPS officer Binoy Behra was also a part of the cast.

Parbati Ghose introduced many young talents. Many of them later found a firm foothold in television and cinema.

Some more feathers in her cap are…

Biopic on the noted Philanthropist and Freedom Fighter Malati Choudhury was well appreciated even at the National level and was used by the Delhi University as a case study.

Her Doordarshan serial “Pura Puri Parabarika” was quite popular. Telefilm “Paribartan” was on tribal health in their local dialect.

To mark the celebrations of 50 years of Independence she was invited to make a telefilm “Pratibha” based on the famous novel by Utkal Kesri Dr. Hare Krushna Mahtab.

She made films like “Sankaalp”, “Surakhya”, “Amari Gaan” for the Family Welfare Dept. of the Orissa Government.

She also experimented in some modern musical videos for Sarthak Music. In some of the videos the lead singer and actor were daughter Ratri and grand daughter Pavlina respectively.

Even though she has retired gracefully from the cine world she emerges now and then for felicitations and voluntary work.