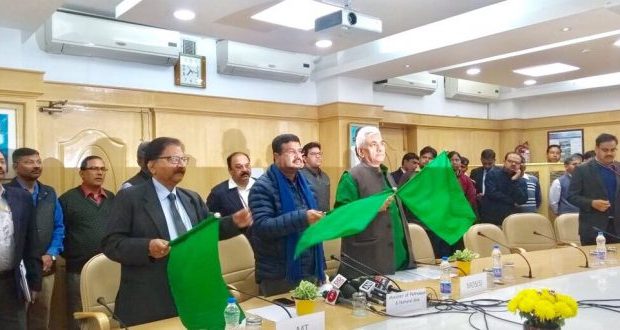 New Delhi/Bhubaneswar10/2/18;: Union Ministers Manoj Sinha and Dharmendra Pradhan on Saturday flagged off the Bhubaneswar- New Delhi Rajdhani Express, which will run via Rourkela, Jharsuguda, Sambalpur and Angul in Odisha.

Bhubaneswar-Delhi Rajdhani Express will run via Sambalpur City once a week with effect from Saturday. The return train will start from Delhi on Sundays.

It will run as 20817/20818 Bhubaneswar-New Delhi-Bhubaneswar Rajdhani Express via Sambalpur City and Jharsuguda with stoppages at Cuttack, Sambalpur City, Jharsuguda, Rourkela, Chakradharpur, Anara, Gomoh, Koderma, Gaya, Mughalsarai and Kanpur Central between Bhubaneswar and New Delhi from both the directions.

According to its schedule, Rajdhani Express (train number 20817) will leave Bhubaneswar at 7.10 am on every Saturday and reach New Delhi at 10.40 am on Sundays. In the return direction, this express train (20818) will leave New Delhi at 5.05 pm on every Sunday and arrive at Bhubaneswar at 8.35 pm on Mondays, said East Coast Railway (ECoR) sources.

2018-02-10
Editor in chief
Previous: Odisha Cabinet decided on bifurcation of Tourism & Culture Department and renaming Culture as Odia Language, Literature & Culture Department
Next: Over 20 activists of the BJP barged into the official residence of V Karthikeyan Pandian