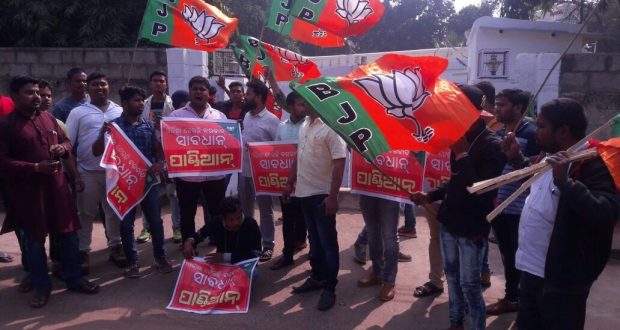 in State News February 10, 2018 Comments Off on Over 20 activists of the BJP barged into the official residence of V Karthikeyan Pandian 753 Views

Bhubaneswar:10/2/18; Over 20 activists of the BJP today barged into the official residence of V Karthikeyan Pandian, the private secretary to Odisha Chief Minister Naveen Patnaik, and ransacked flower pots and vehicles here.

According to reports, the saffron party workers waving party flag stormed into Pandian’s residence and ransacked flower pots, damaged the vehicles parked inside the quarters and hurled cow dungs and stones.

At least five BJP workers have been arrested by the Commissionerate Police in this connection.

“It is very unfortunate that a public servant has been attacked. The Commissionerate Police has taken the matter very seriously. Stringent action will be taken against those who are involved in the incident. Some of them have been arrested. We will not allow anyone violating the law here,” said Twin City Police Commissioner YB Khurania who rushed to the spot after getting information.