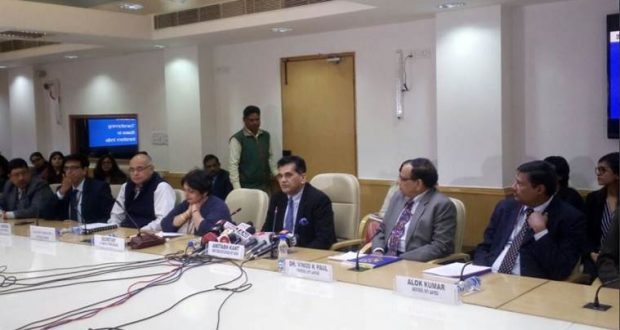 Newdelhi:10/2/18;NITI Aayog released today a comprehensive Health Index report titled, “Healthy States, Progressive India” at a function in the capital today. The report ranks states and Union territories innovatively on their year-on-year incremental change in health outcomes, as well as, their overall performance with respect to each other. The report was released jointly by the CEO, NITI Aayog; Amitabh Kant, Secretary, Ministry of Health & Family Welfare; Preeti Sudan and World Bank India Country Director, Junaid Ahmad. It is the first attempt to establish an annual systematic tool to measure and understand the heterogeneity and complexity of the nation’s performance in Health. The report has been developed by NITI Aayog, with technical assistance from the World Bank, and in consultation with the Ministry of Health and Family Welfare (MoHFW),

States and UTs have been ranked in three categories namely, Larger States, Smaller States, and Union Territories (UTs), to ensure comparison among similar entities. The Health Index is a weighted composite Index, which for the larger States, is based on indicators in three domains: (a) Health Outcomes (70%); (b) Governance and Information (12%); and (c) Key Inputs and Processes (18%), with each domain assigned a weight based on its importance.

Among the Larger States, Kerala, Punjab, and Tamil Nadu ranked on top in terms of overall performance, while Jharkhand, Jammu & Kashmir, and Uttar Pradesh are the top three ranking States in terms of annual incremental performance. Jharkhand, Jammu & Kashmir, and Uttar Pradesh showed the maximum gains in improvement of health outcomes from base to reference year in indicators such as Neonatal Mortality Rate (NMR), Under-five Mortality Rate (U5MR), full immunization coverage, institutional deliveries, and People Living with HIV (PLHIV) on Anti-Retroviral Therapy (ART).

The Health Index report notes that while States and UTs that start at lower levels of development are generally at an advantage in notching up incremental progress over States with high Health Index scores, it is a challenge for States with high Index scores to even maintain their performance levels. For example, Kerala ranks on top in terms of overall performance but sees the least incremental change as it had already achieved a low level of Neonatal Mortality Rate (NMR) and Under-five Mortality Rate (U5MR) and replacement level fertility, leaving limited space for any further improvements.

However, the incremental measurement reveals that about one-third of the States have registered a decline in their performance in 2016 as compared to 2015, stressing the need to pursue domain-specific, targeted interventions. Common challenges for most States and UTs include the need to focus on addressing vacancies in key staff, establishment of functional district Cardiac Care Units (CCUs), quality accreditation of public health facilities and institutionalization of Human Resources Management Information System (HRMIS). Additionally, almost all Larger States need to focus on improving the Sex Ratio at Birth (SRB).

Linking this Index to incentives under the National Health Mission by the Ministry of Health and Family Welfare underlines the importance of such an exercise. The report also notes that rich learnings have emerged in the first year and these will guide in refining the Index for the coming year and also address some of the limitations. It notes that there is an urgent need to improve data systems in the health sector, in terms of terms of representativeness of the priority areas, periodic availability for all States and UTs, and completeness for private sector service delivery. This Index is expected to nudge States towards further achieving a rapid transformation of their health systems and population health outcomes.

Health Index has been developed as a tool to leverage co-operative and competitive federalism to accelerate the pace of achieving health outcomes. It would also serve as an instrument for “nudging” States & Union Territories (UTs) and the Central Ministries to a much greater focus on output and outcome based measurement of annual performance than is currently the practice. With the annual publication of the Index and its availability on public domain on a dynamic basis, it is expected to keep every stakeholder alert to the achievement of Sustainable Development Goals (SDGs) Goal number 3.

The process of index refinement involved inputs from the States and UTs, national and international sector experts, and development partners. Data submitted by the States & UTs was validated by an Independent Validation Agency, following which index values and ranks were generated on the web portal (http://social.niti.gov.in), and certified by the Independent Agency.

2018-02-10
Editor in chief
Previous: Film and Television Institute of India will conduct a week-long film appreciation course in Bhubaneswar
Next: Winter Olympics 2018