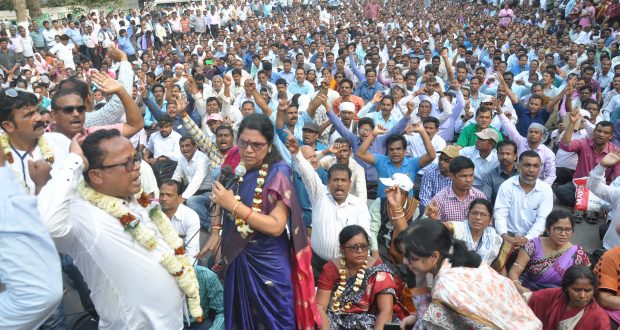 in State News February 8, 2018 Comments Off on Thousands of school and college teachers and staff staged a mass demonstration at the Lower PMG 760 Views

Bhubaneswar: 8/2/18;Thousands of school and college teachers and staff staged a mass demonstration at the Lower PMG here on Thursday protesting compulsory submission of a proposed affidavit for grant-in-aid introduced by the State Government.

The affidavit though promises to give financial benefits, also prevents teachers from staging any kind of protests in future, they alleged.

The agitating teachers warned to boycott the forthcoming Matric and Plus-II examinations if the state government does not take back the proposed affidavit. This apart, they also threatened to take out anti-government rallies during Bijepur by-polls.

The protesters under the banner of Odisha School College Teachers’ and Employees United Forum had taken out a Padayatra from Gundicha Temple in Puri on Tuesday to press their demands. They reached the state capital this morning.

Meanwhile, Higher Education Minister Ananta Das has urged the the teachers to withdraw their protests.

2018-02-08
Editor in chief
Previous: Political parties in Odisha has tuning their strategies to intensify their campaigns for the Bijepur by-poll
Next: Nepal king, Gyanendra Bir Bikram Shah Dev visited the Lingaraj temple