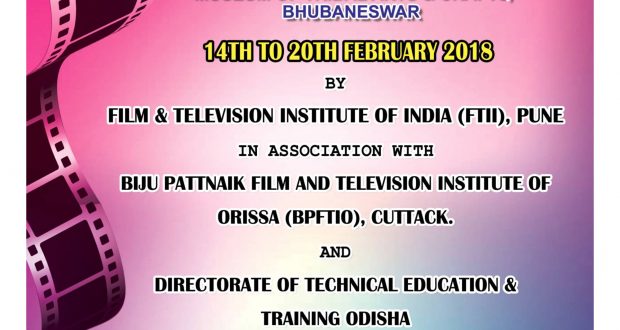 in State News February 8, 2018 Comments Off on Film and Television Institute of India will conduct a week-long film appreciation course in Bhubaneswar 730 Views

Bhubaneswar:8/2/18; The Film and Television Institute of India (FTII), Pune will conduct a week-long film appreciation course in Bhubaneswar as part of the institute’s nationwide programme to popularise film learning  in association with Biju Pattnaik Film and television Institute ,Cuttack and Directorate  of Technical Education and training ,Odisha. The film appreciation course in Bhubaneswar will provide a unique opportunity to the cine lovers of Odisha to understand cinema from one of the world’s leading film schools, the Director of FTII, Pune, Bhupendra Kainthola said. The film appreciation course, to begin from February 14 and ends in 20th, February,2018. Will be conducted for the first time in Orissa, an official release said.

For over five decades, film appreciation was just a once a year course, conducted only in Pune and this made little sense for a country with a rich cinematic history and millions of cinema lovers, he said.

Though the film appreciation course in Bhubaneswar will be open to all, only 100 participants will be admitted on a first-come-first-served basis, and it will be held at the Museum of Tribal Arts & Crafts.

The course will be conducted by renowned film academic Pankaj Saxena, an FTII alumnus, who is a filmmaker and TV programmer based in New Delhi, it said.