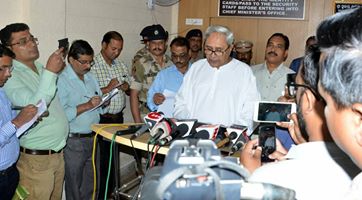 Bhubaneswar:7/2/18;Chief Minister Naveen Pattnaik  announced a SIT (Special Investigation Team) probe into the Kunduli incident with a prayer to be monitored by the Odisha High Court.

The Kunduli alleged gangrape case is an extremely tragic incident. It is my firm belief that law should take its own course and justice should be done without fear and favour.

In addition to transferring the case for investigation to the Crime Branch, the State Government had also instituted an independent Judicial Inquiry with a sitting judge nominated by the Hon’ble High Court.

Because of the extraordinary circumstances of the case after the death of the victim girl, my strong faith and conviction in the principles of natural justice and commitment to safety and dignity of women, the State Government will take immediate steps for handing over the investigation of the cases to a Special Investigation Team with a prayer to be monitored by Court.

The State Government is committed that justice should be delivered at the earliest and in the most transparent manner.

2018-02-07
Editor in chief
Previous: Sambit is all set to be seen in Odia film Feel My Dil with two heroines for the first time
Next: Nepal king Gyanendra Bir Bikram Shah Dev came on a six-day Odisha visit