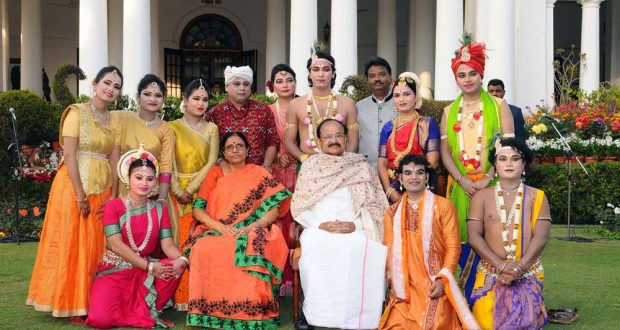 in National January 28, 2018 Comments Off on Vice President meets and greets the Tableaux Artistes and Tribal Guests 1,413 Views

The Vice President said that performance of different artistes from different part of the country at one platform reflect the unique identity of our nation – ‘Unity in diversity’. This brings the national harmony and universal brotherhood, he added.

The Tableaux Artistes have performed different cultural events, which were performed during the Republic Parade – 2018, before the Vice President and hundreds of other invitees. Artistes from Assam, Jammu & Kashmir, Tripura, Gujarat, Maharashtra and Chhattisgarh have participated in the performances.

The Members of Ministry of Sports have performed breath-stopping ‘Mallakhamba’ Sport, which impressed everyone present there.

The Vice President arranged Tea and Snacks to all the visitors at his residence.