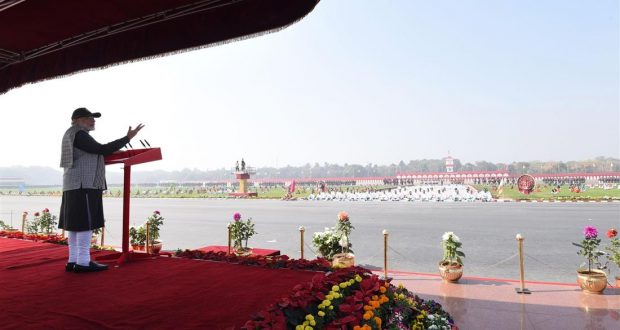 Newdelhi:28/1/185;The Prime Minister, Shri Narendra Modi, today addressed the NCC rally in New Delhi. He said every young NCC Cadet came to this gathering with his or her own personality and identity. But, he added, that over the course of a month, new friendships would have been forged, and a lot would have been learnt from each other. NCC camps teach every youngster about the different cultures of India, he said. They motivate every youngster to do something good for the nation, he added.
The Prime Minister said that this spirit that has been learnt in NCC camps will remain with the Cadets for life. He said that the National Cadet Corps is not about uniform or uniformity, it is about unity. Through NCC we nurture teams that work in mission mode and inspire others, he added.

The Prime Minister said that the NCC has completed seven glorious decades, and has given a sense of mission to several people. Today we celebrate what we have achieved and also think about how we can make the NCC experience even more effective in the years to come, the Prime Minister said. He urged all stakeholders to think about the plan of action of the next 5 years, when NCC turns 75.

The Prime Minister appealed to the Cadets to promote digital transactions through the BHIM App, and to motivate others to join that platform. He said that this a step towards transparency and accountability. Once the youth of India decide something, everything is possible, he added.

The Prime Minister said that earlier, people believed that nothing happens to the rich and powerful. But, he added that things are different today. People who served as Chief Ministers are in jail for their corruption, he asserted.

Speaking on Aadhaar, he said it has added great strength to India’s development. What would earlier get into wrong hands is now going to the intended beneficiaries, he added.