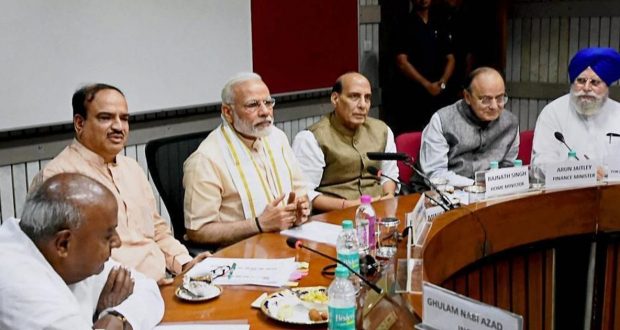 in National January 28, 2018 Comments Off on All-party meetings have been convened before the budget session of Parliament 1,213 Views

New Delhi:28/1/18; All-party meetings have been convened today before the budget session of Parliament. Prime Minister Narendra Modi will also participate in this meeting. At the same time, Lok Sabha Speaker Sumitra Mahajan has also called an all-party meeting in the evening.

The meeting has been convened today at 4 pm before the budget session starting on Monday. The Parliamentary Affairs Minister has convened this meeting, in which PM Modi along with leaders of all the parties will also be participating. After which the dinner will be done.

With the address of the joint meeting of the both houses by President Ramnath Kovind, the budget session will be inaugurated on Monday, after assuming office as President; Kovind will address the joint session of Parliament for the first time.

The Union Budget will be presented in Parliament on February 1. The holiday will be declared from February 9 to the session. The second phase of the budget session will start from March 5, which will run till 6 April.